Well we did it.
Went on an actual vacation.
Sure, we've been lots of places...but I would definitely call those "trips."
But yes...an actual vacation, where there's no agenda or a billion things we're trying to do or lots of people we're trying to see, happened.
And since we haven't had a vacation since I was 9 weeks pregnant and felt slightly like death...it was a very welcome thing!

A few months ago we were by the pool (which is at the old house.  RIP pool.  You are missed. :( ) with our friends Matt & Glenna.
They talked about Catalina and how great it was.
Alex had only been there for scout camp, but hadn't been to the other side of the island, where all the action is.
So we decided to all take a trip!
Thankfully they love Kameron so the thought of taking a trip with a baby doesn't turn them off. :)

So on Memorial Day we headed down to Long Beach to take the ferry out to Catalina!
It is about 26 miles from the mainland.
Kameron loved the rockin' and rollin' and thought the ferry was all around a pretty cool experience. 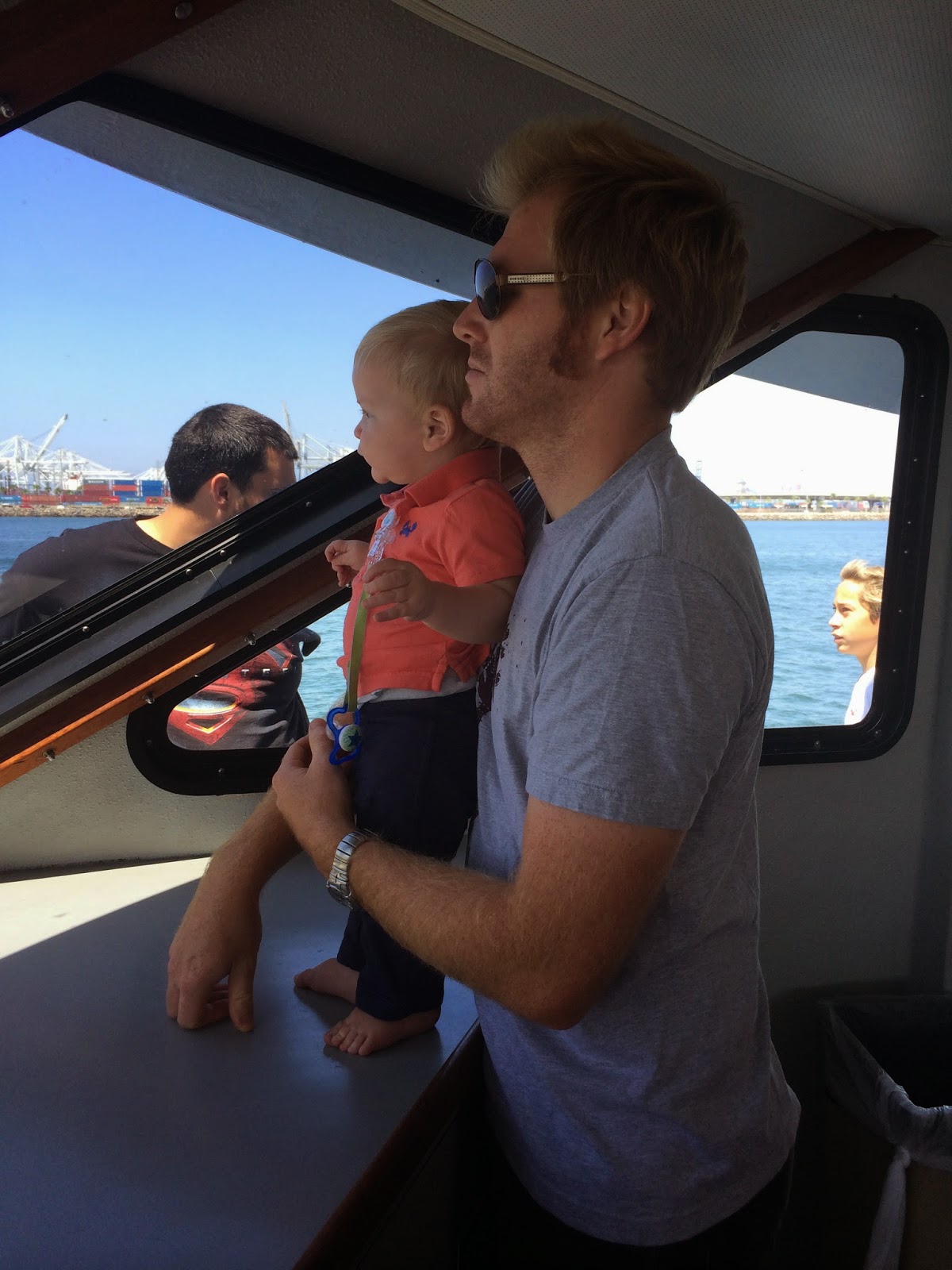 Us on the ferry about to reach the island! 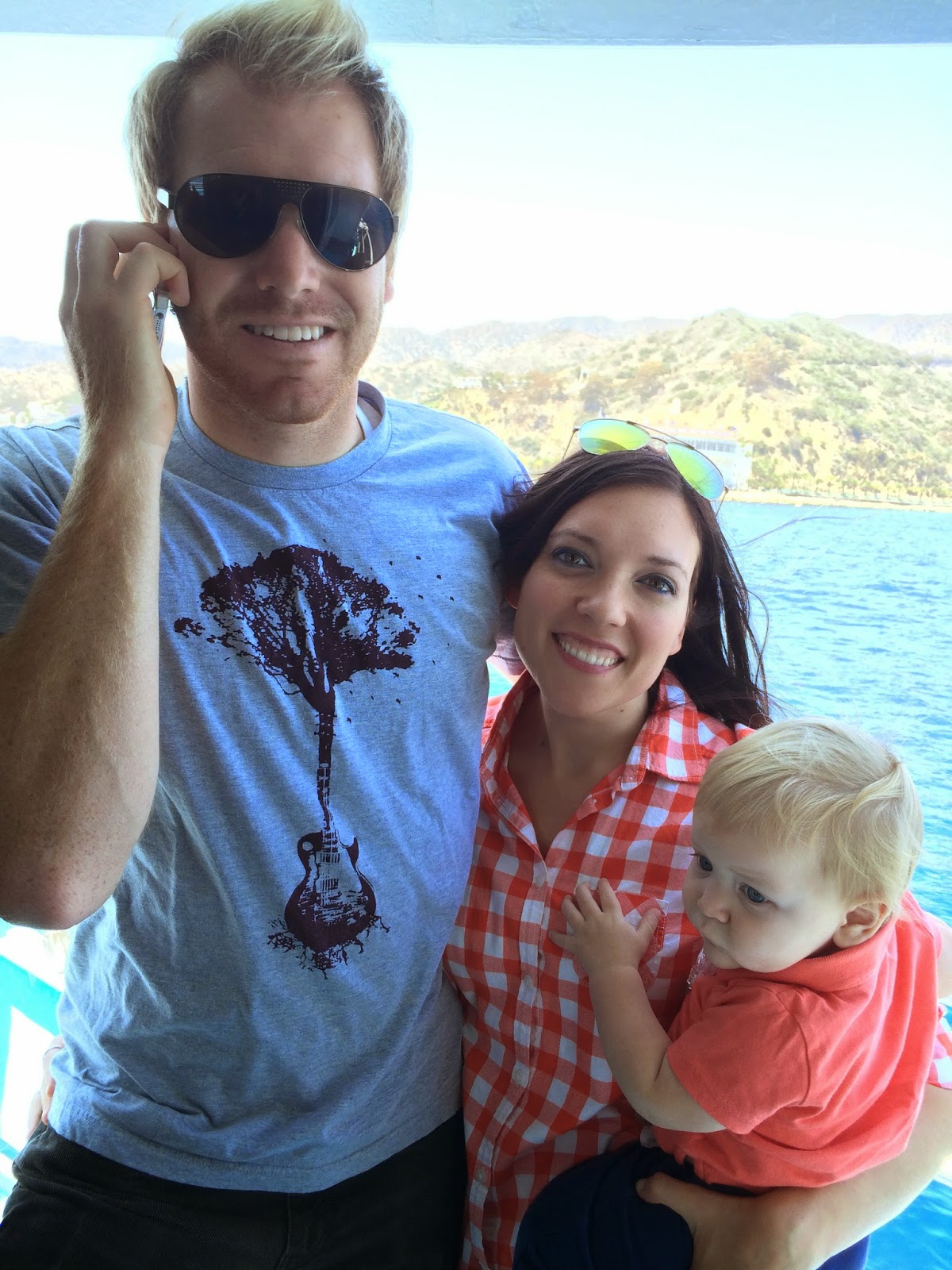 A taxi was waiting to pick us up and take us to the condo we were going to be staying in.
Where we docked was the main city of Catalina, called Avalon.
There are approximately 4,000 residents and the majority of them live in Avalon.
However, around the bend and a mile or so away from the city is Hamilton Cove...which is where we stayed.
Hamilton Cove is its own little slice of pure heaven.
They have their own community complete with pool, hot tub, 18 hole putt putt course, fitness center, little beach, playground, and a croquet field.
This was the view from our balcony.
Sometimes I felt like I was in a mini Greece with how the buildings were set up. 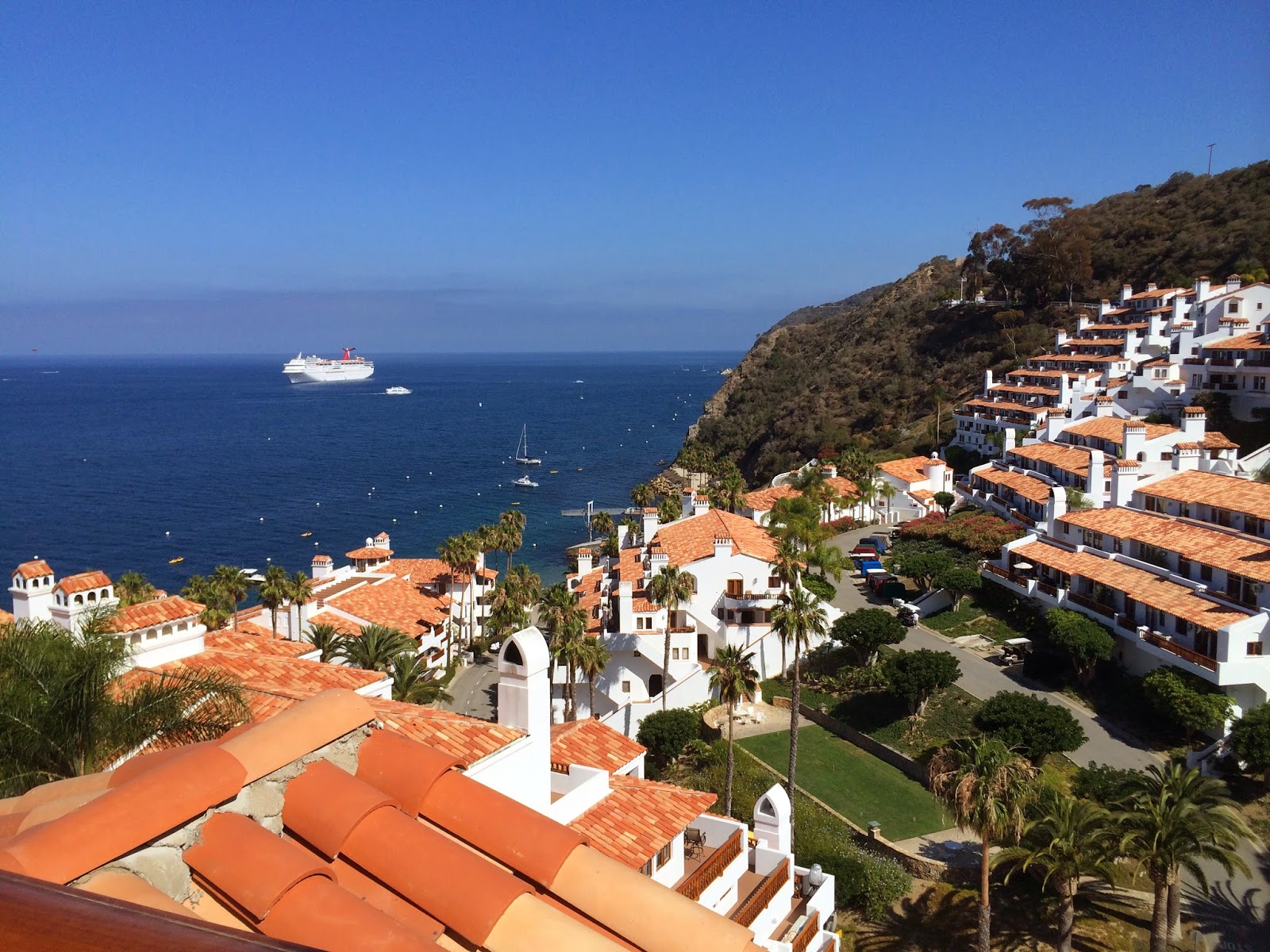 Once we got our stuff all checked in, we headed into town so Matt could show us Avalon for a bit and then go grocery shopping.
90% of the vehicles you see on Catalina are golf carts.
Some cars, a few SUVs/trucks, some scooters and bikes...but mostly golf carts.
No traffic lights.
It was kind of amazing.
The golf cart that came with our condo was in the shop so for the first day and a half we had a rental.
It was pretty ghetto, but it was a good laugh!
After Kameron napped we went back into the city to walk along the waterfront and then just hung out at our place the rest of the evening.

The next day Kameron woke up SO early.
He apparently did not get the memo that we were on vacation and you're supposed to sleep in.
No...he decided to wake up an hour earlier than he usually does.
But oh well...how can you complain when he's really cute, gets excited when he sees you, and then you have the awesome view from your balcony.
Matt & Glenna went ziplining so the 3 of us went on a hike.
We golf carted our way up Avalon canyon and then hiked on through the botanical gardens to the Wrigley Memorial. 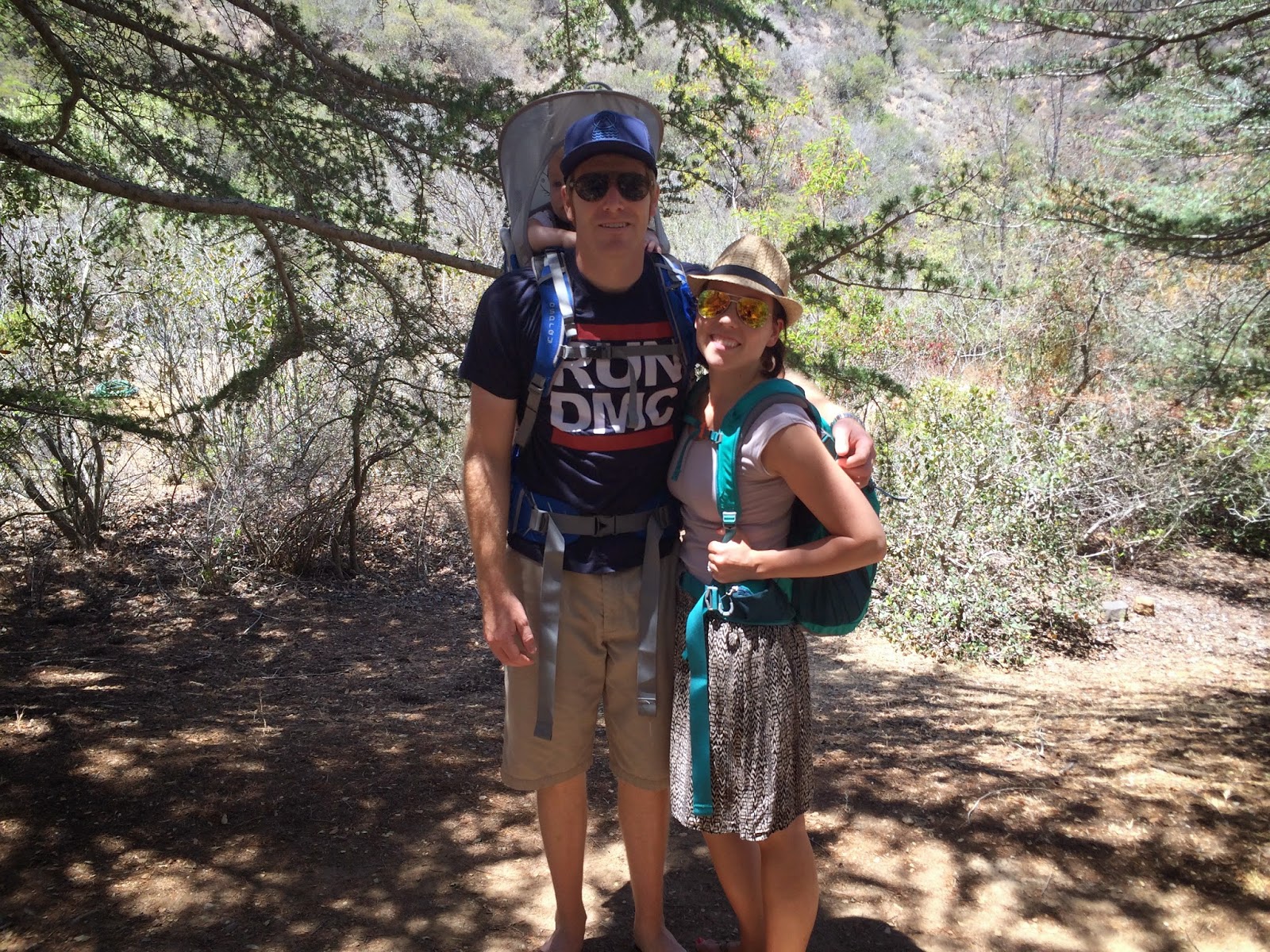 Yes...Wrigley.
Like the gum.  And the Chicago Cubs.
Our first night when I saw Cubs paraphernalia in the windows I was pretty confused to say the least.
BUT...the Wrigleys bought the island in the early 1900s and still own about 90% of it today.
The baseball team did spring training on the island from 1921-1951...pretty cool.
Anywho...we hiked to the memorial in their honor.
I LOVE the architecture on the island.
So much tile.
To die for. 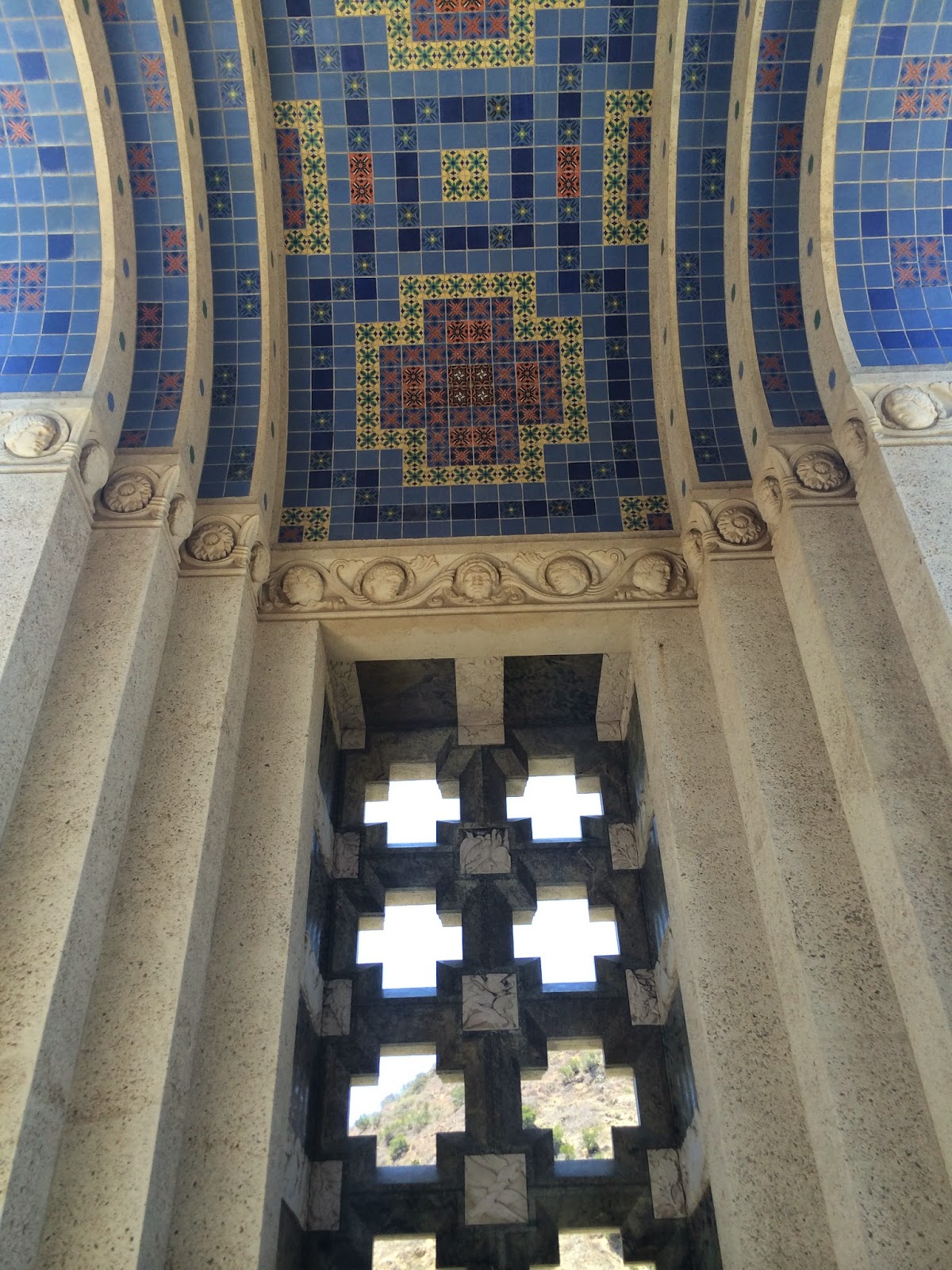 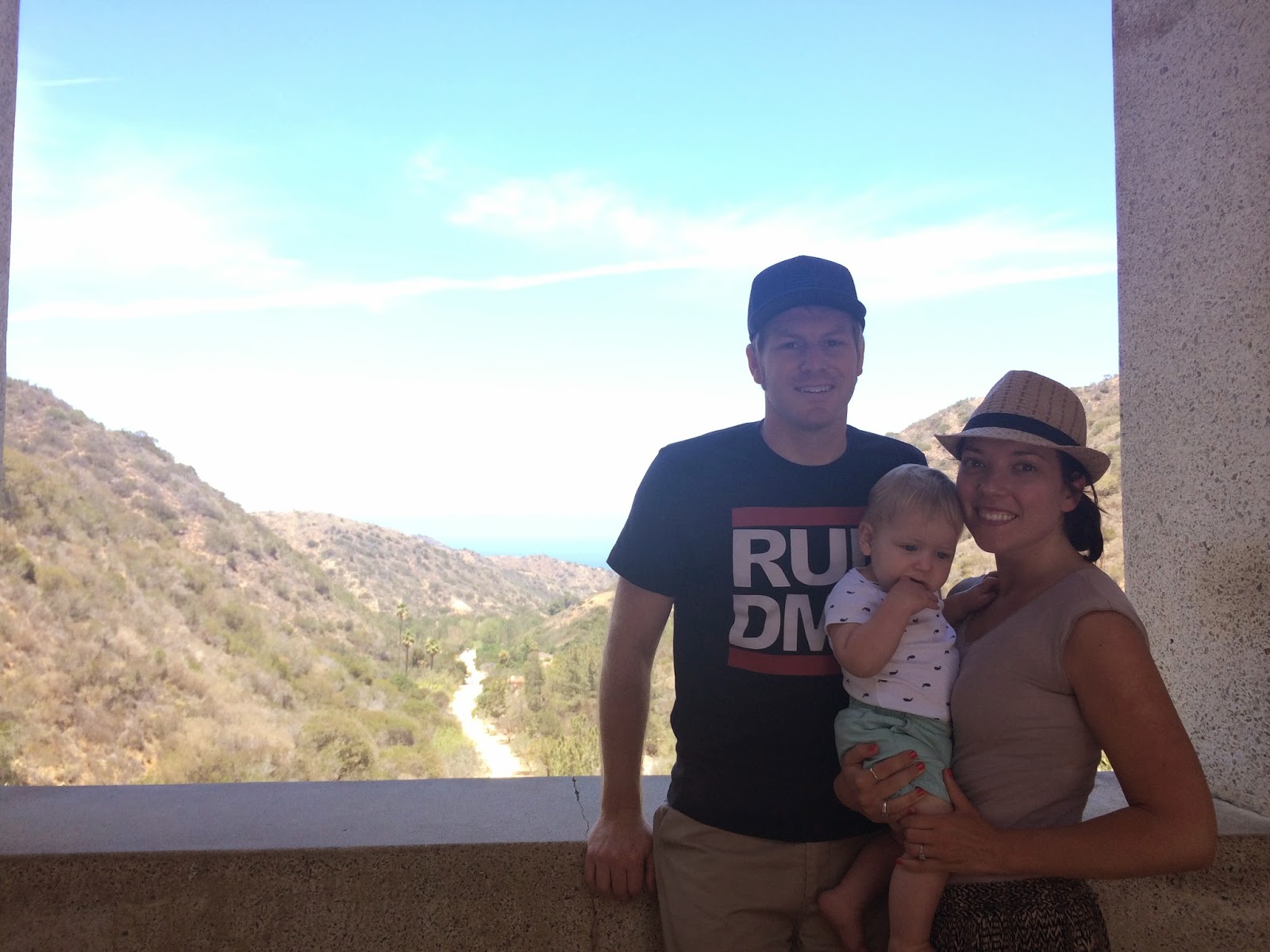 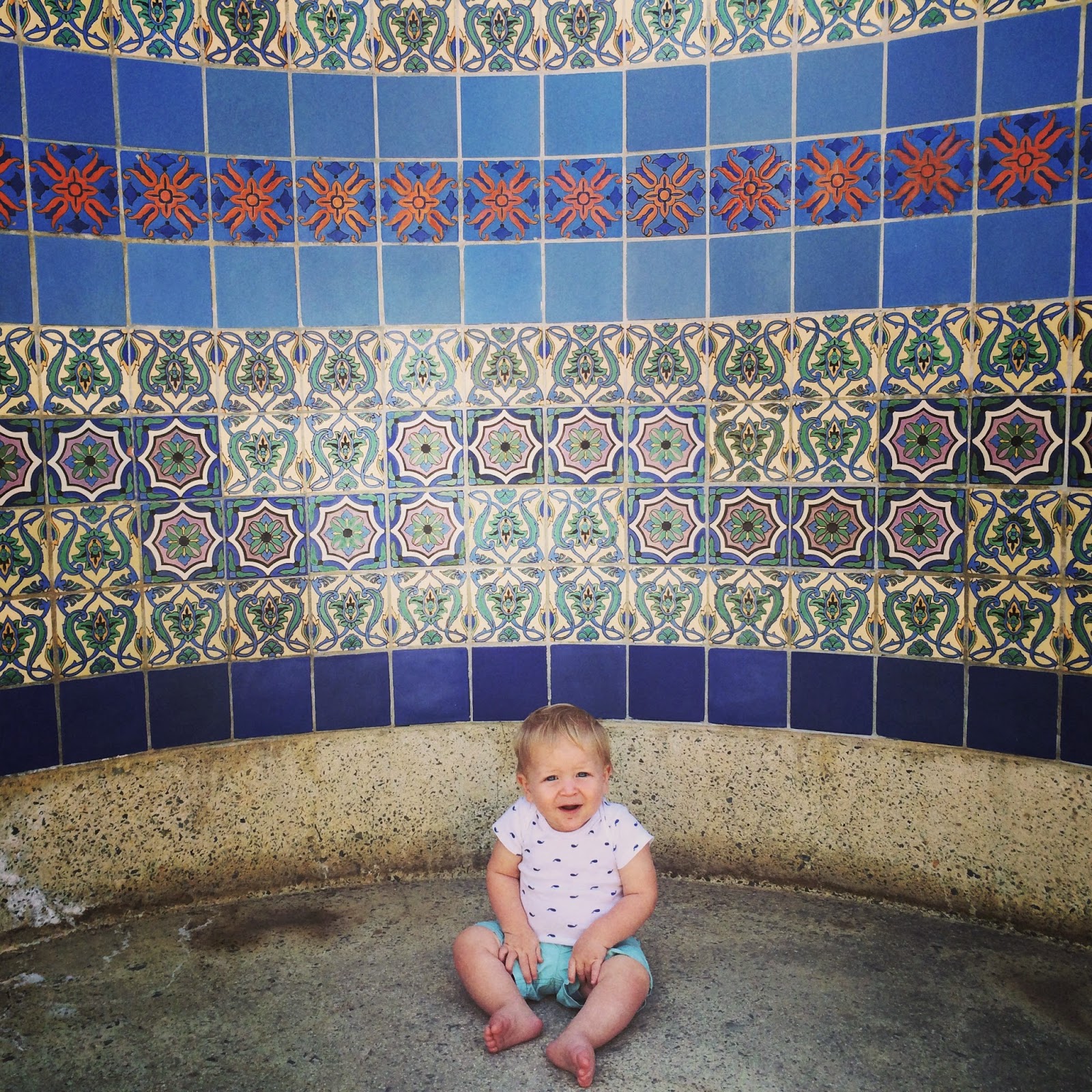 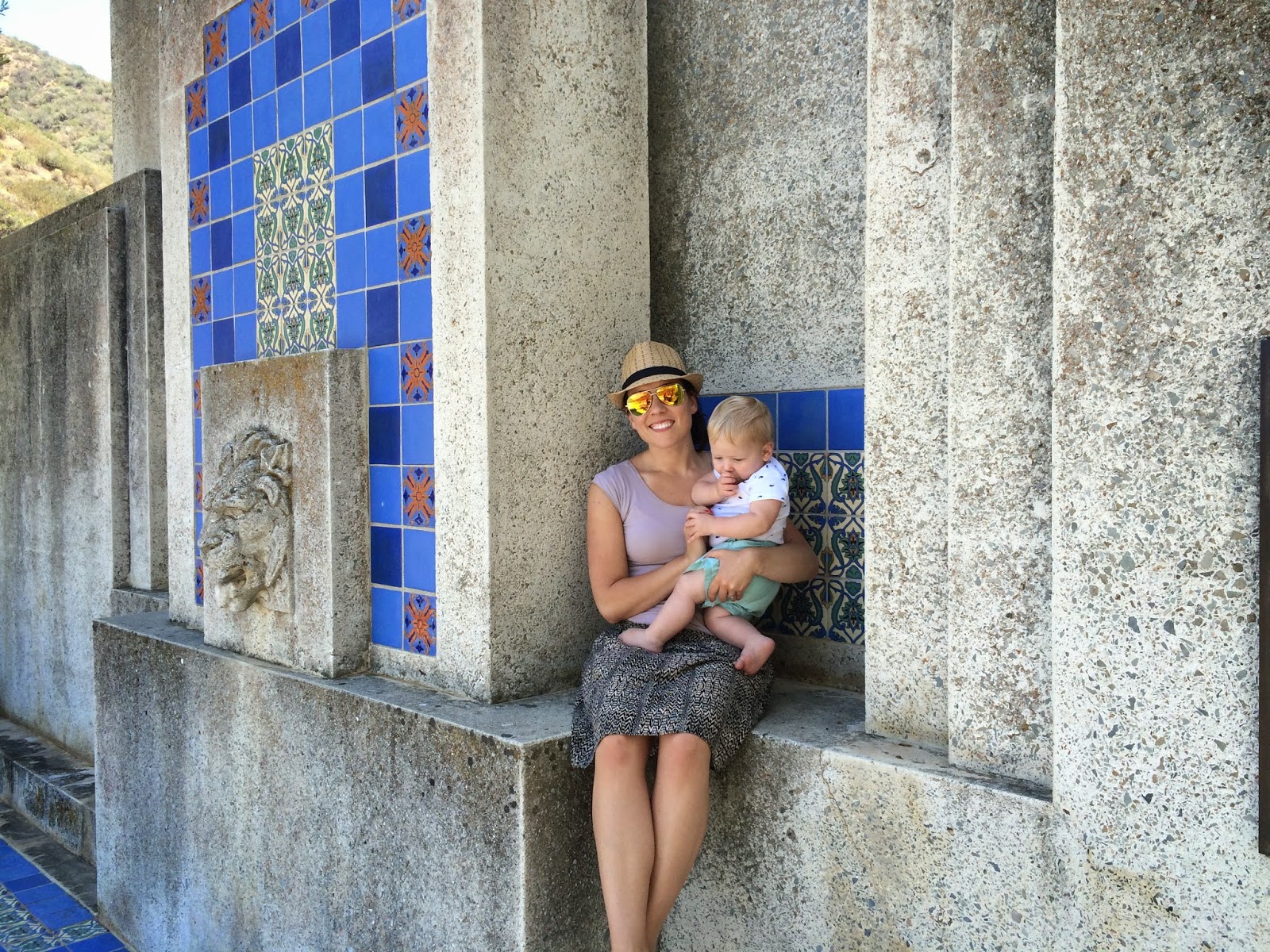 We still had some time to kill before Matt & Glenna were done, so we decided to just drive around and explore Avalon some more.
So we did.
We found the gas station.
And boy am I glad gas is not that expensive in Santa Barbara! 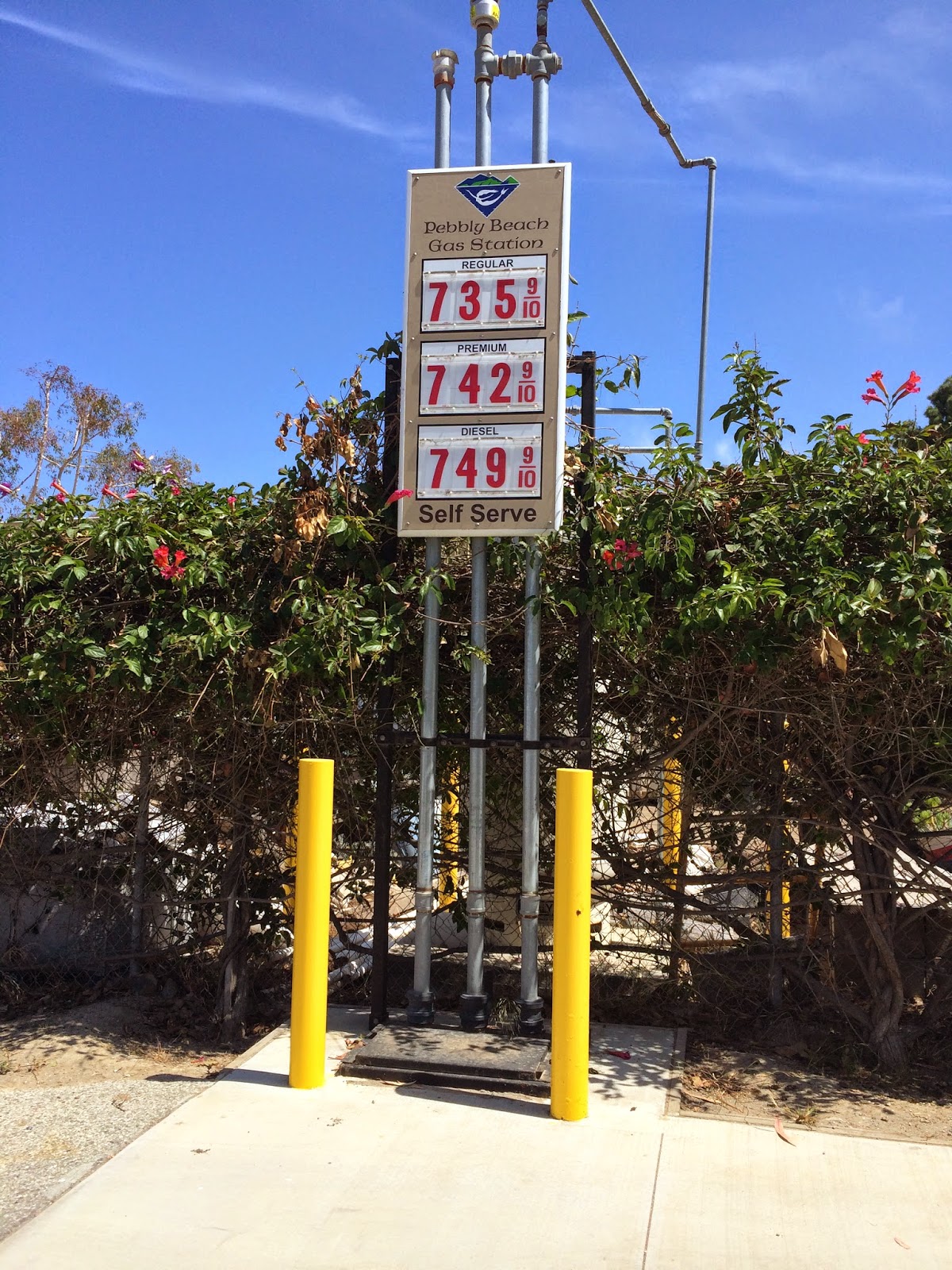 We stopped for a bit at "Lover's Cove" and watched the water crash against the rocks.
And we also saw these orange fish (whose name currently escapes me) swimming around in the coral nearby.
Kameron is so fascinated with the ocean. 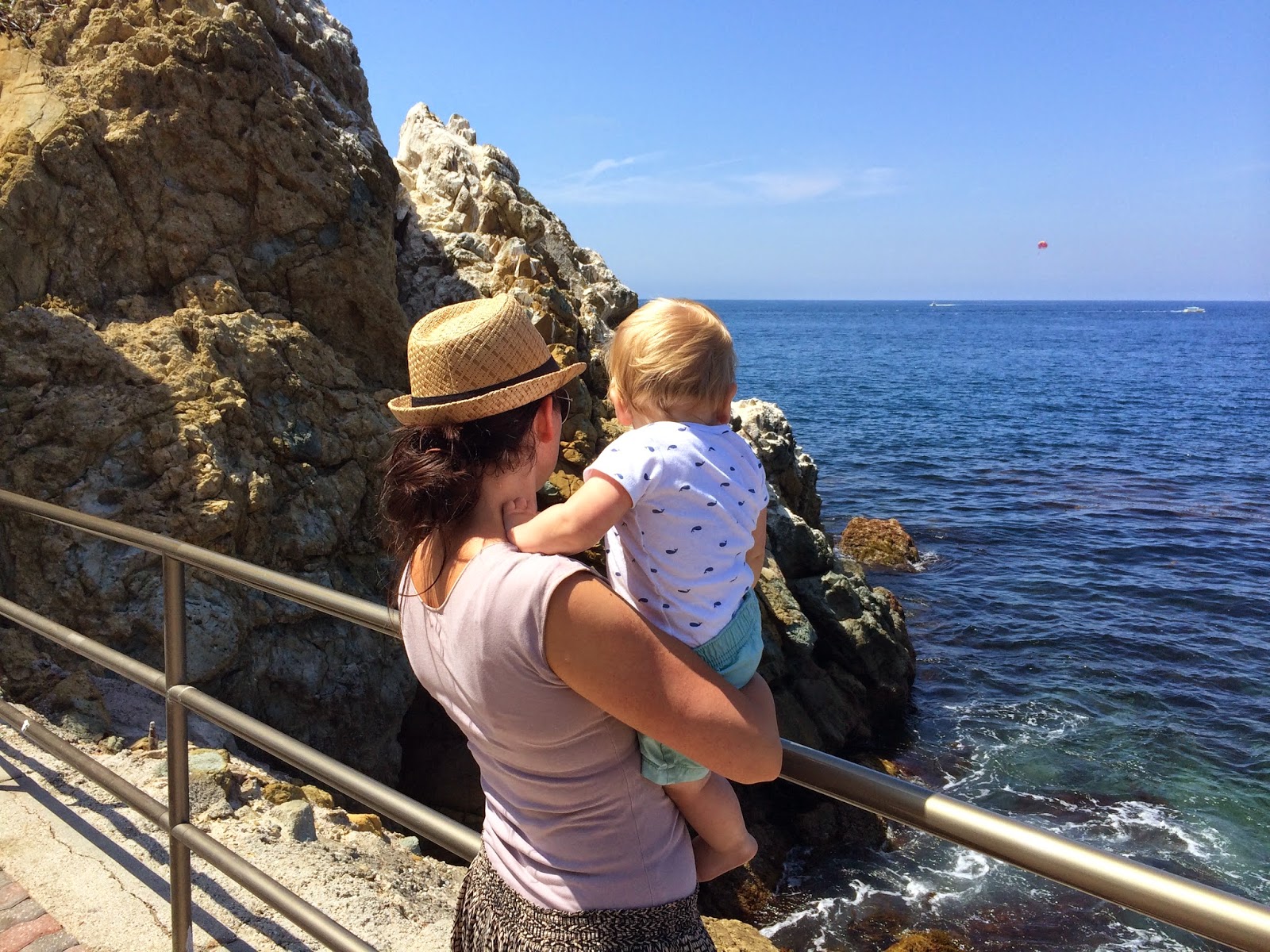 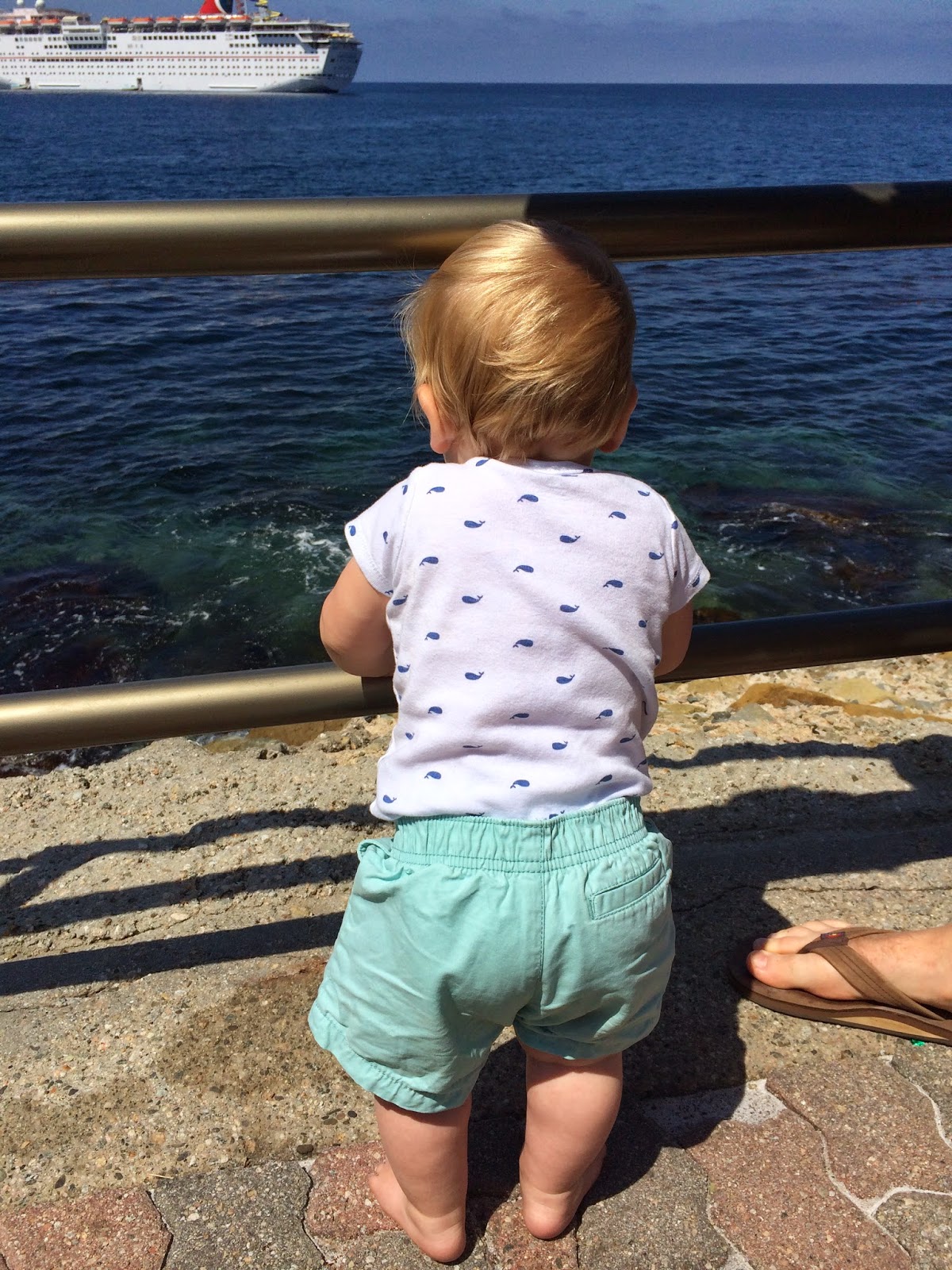 Then we picked up Matt & Glenna from their ziplining excursion.
Matt told us our golf cart was ready to be picked up so we said "farewell" to the ghetto cart and said "oh hello" to our nice one. 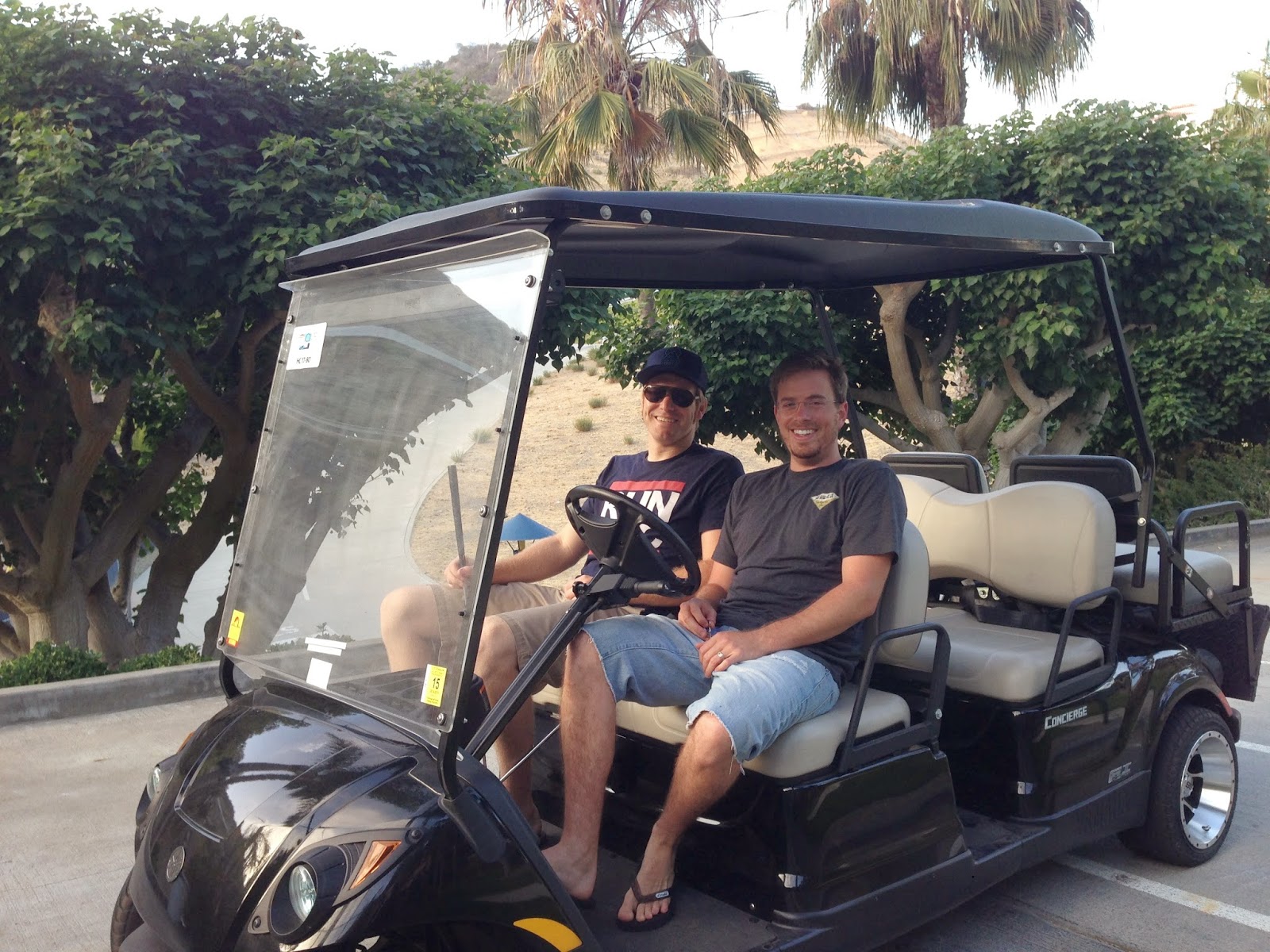 That evening we played a round of putt putt.
Matt & Glenna keep track of their strokes.
Glenna & I do not.
Glenna attempted to golf one-handed while holding Kameron.
She did pretty well.
I tried it.
Not so good. 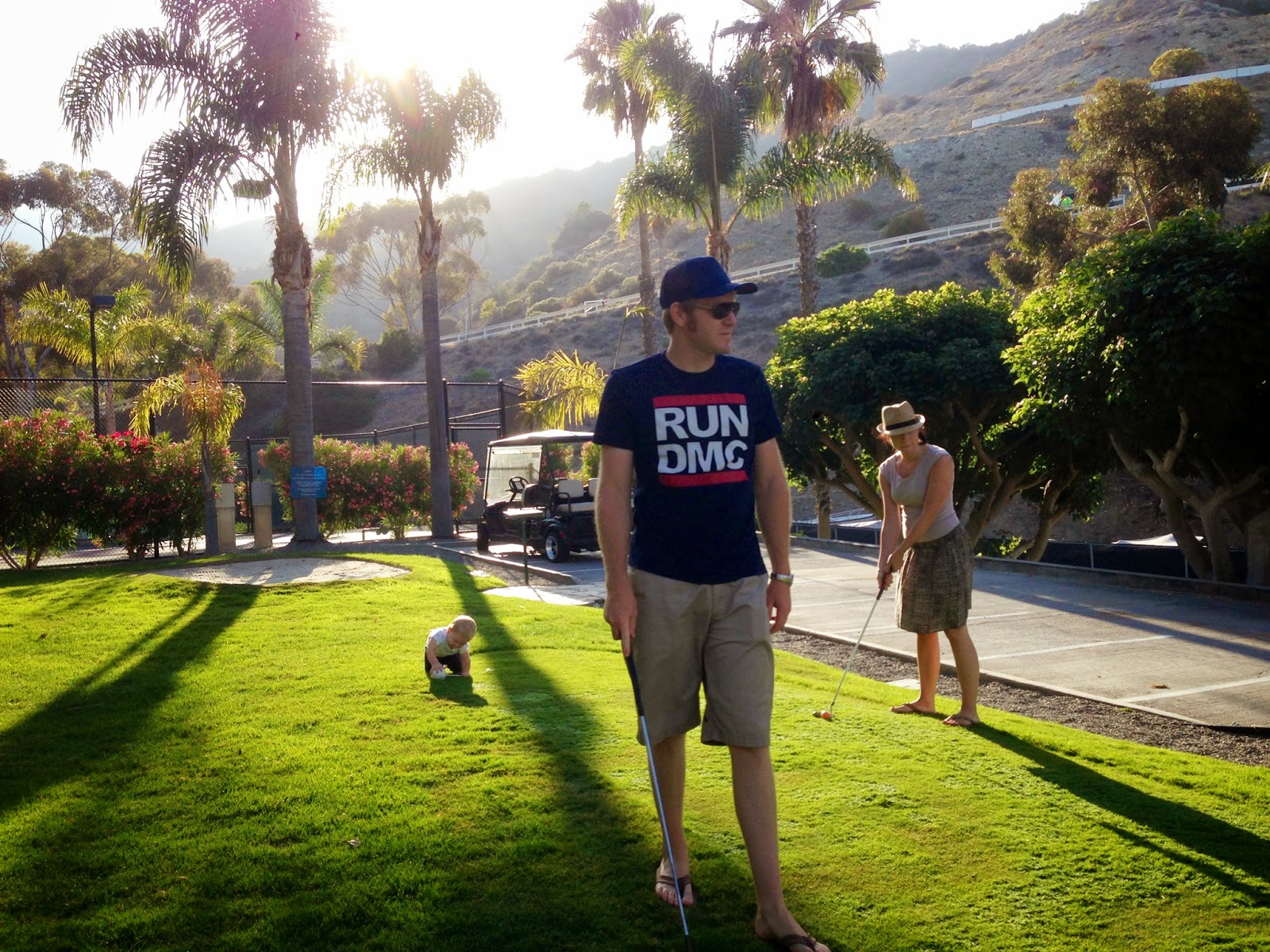 Then for dinner the boys grilled up some dogs, which we ate on the balcony.
Kam loved the chili. :) 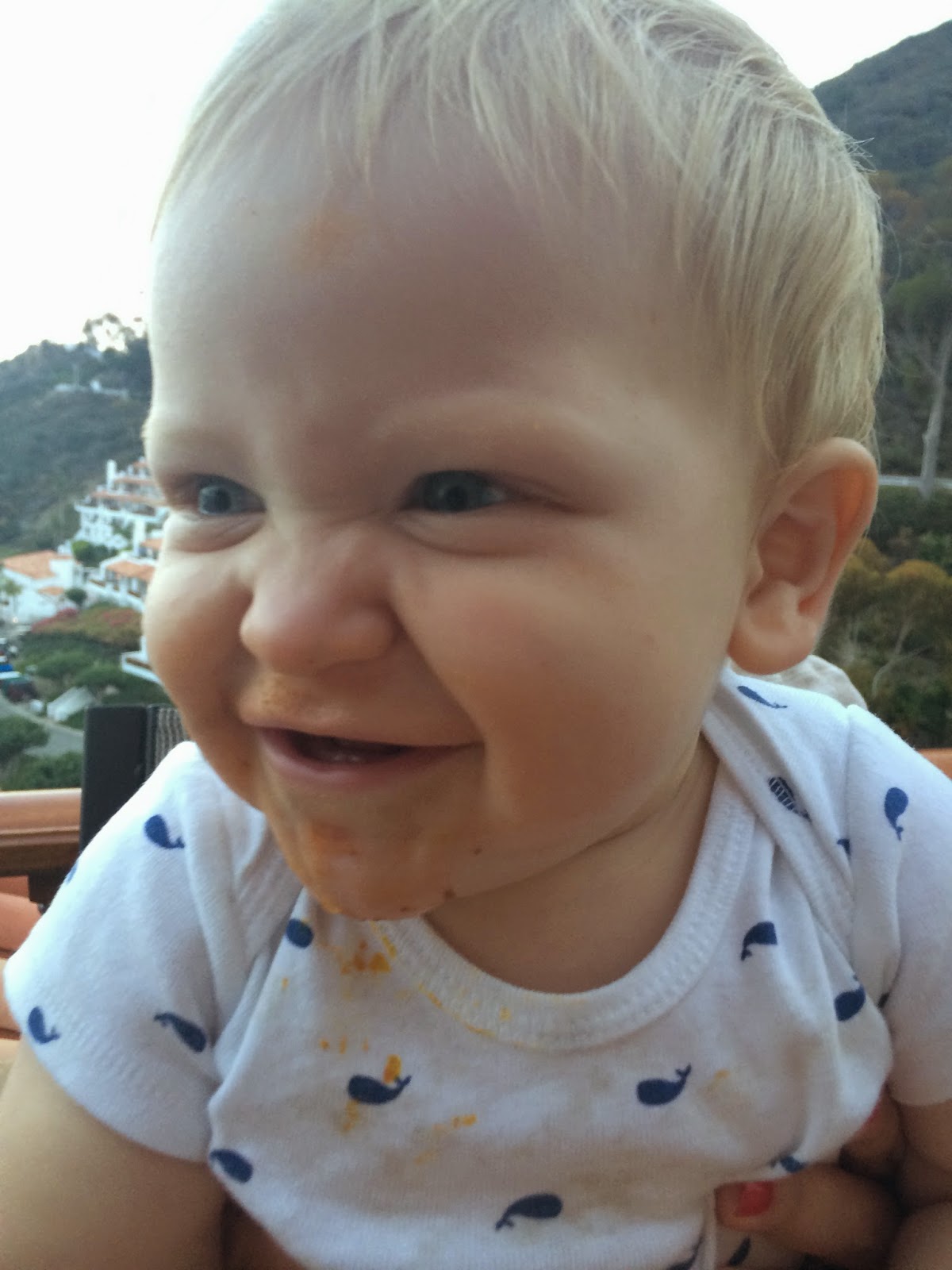 Kameron did a little better the next morning and just woke up at his normal time.
Matt & Glenna were amazing and watched him for us so we could go on a ziplining date!
It. Was. Awesome.
If you ever can go...just do it.
For real.
This picture was right before our first zip!
I had to nervous pee right about now. 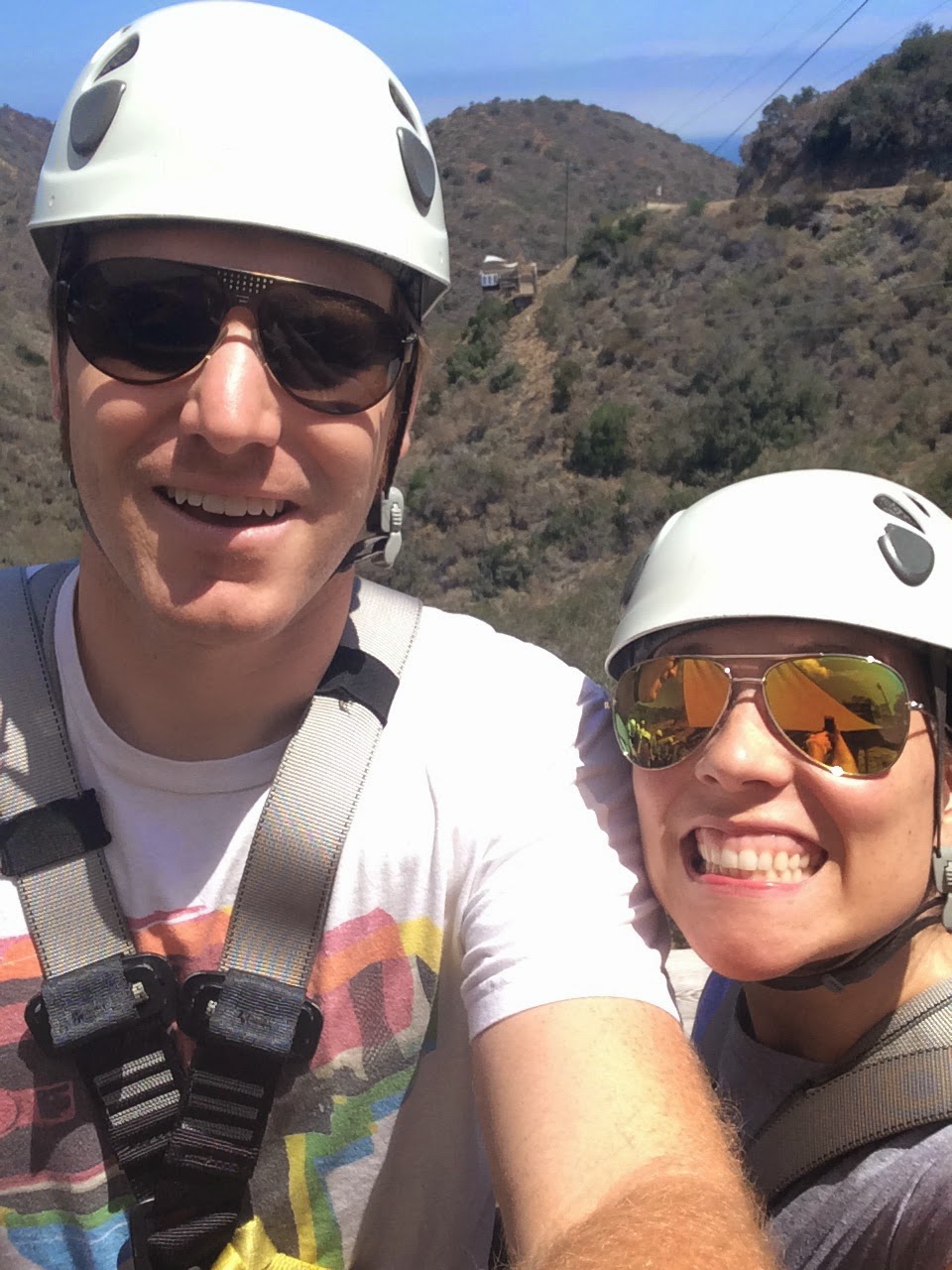 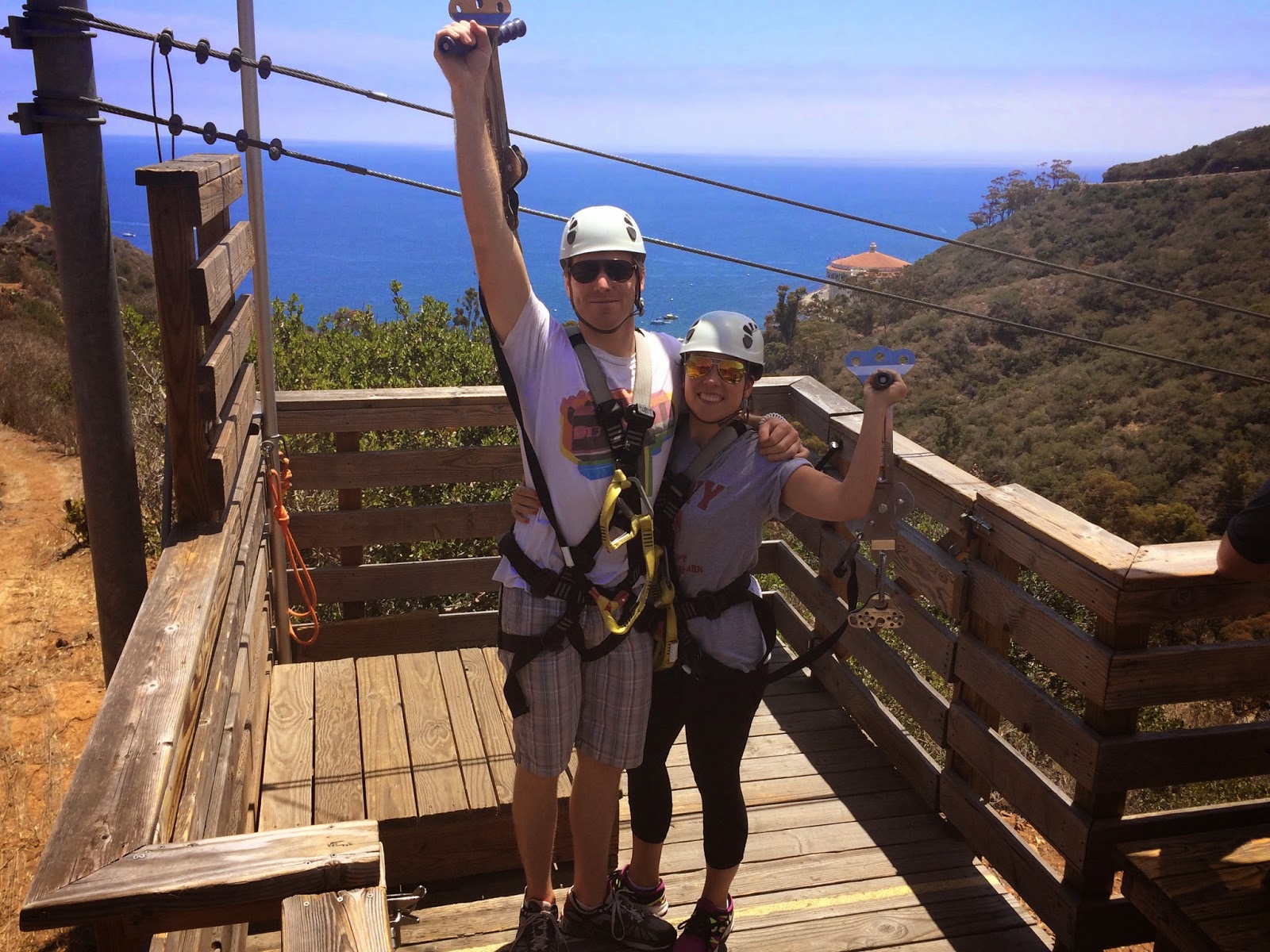 Our guides, Justin & Alaina, were so fun! 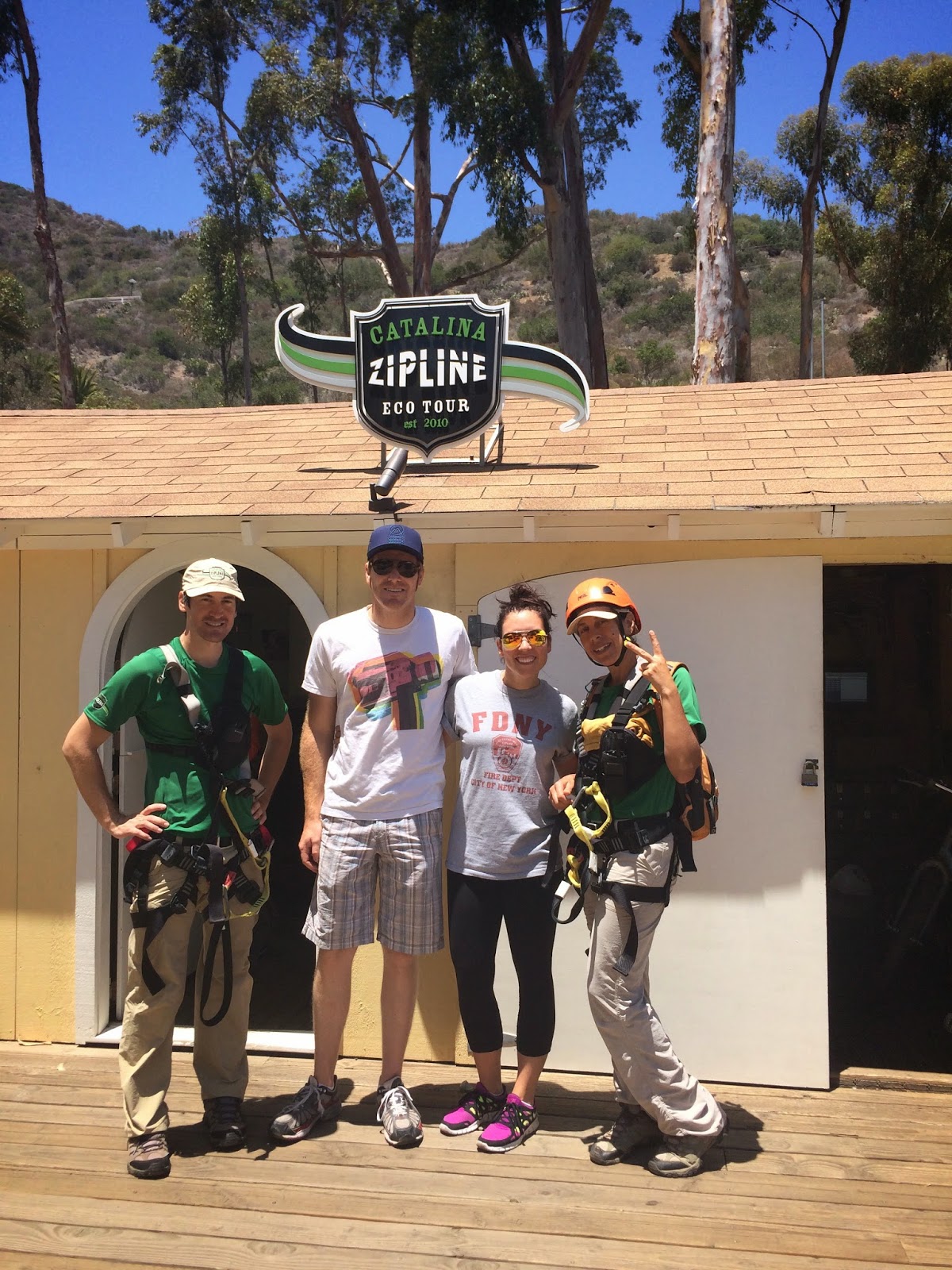 When Matt & Glenna picked us up we drove to the docks to rent a boat.
However, after getting 10 minutes out, Matt thought the top speed of our current boat was no bueno.
So back we went to trade it out for a faster one.
The afternoon out on the water was so amazing!
It definitely made me miss home.
I felt so bad for Kameron in his cumbersome life jacket.
He kept grabbing at it like, "WHAT IS THIS THING TRYING TO ATTACK MY HEAD?!"
But eventually he got interested enough in the wind and water and then even let the waves rock him to sleep. 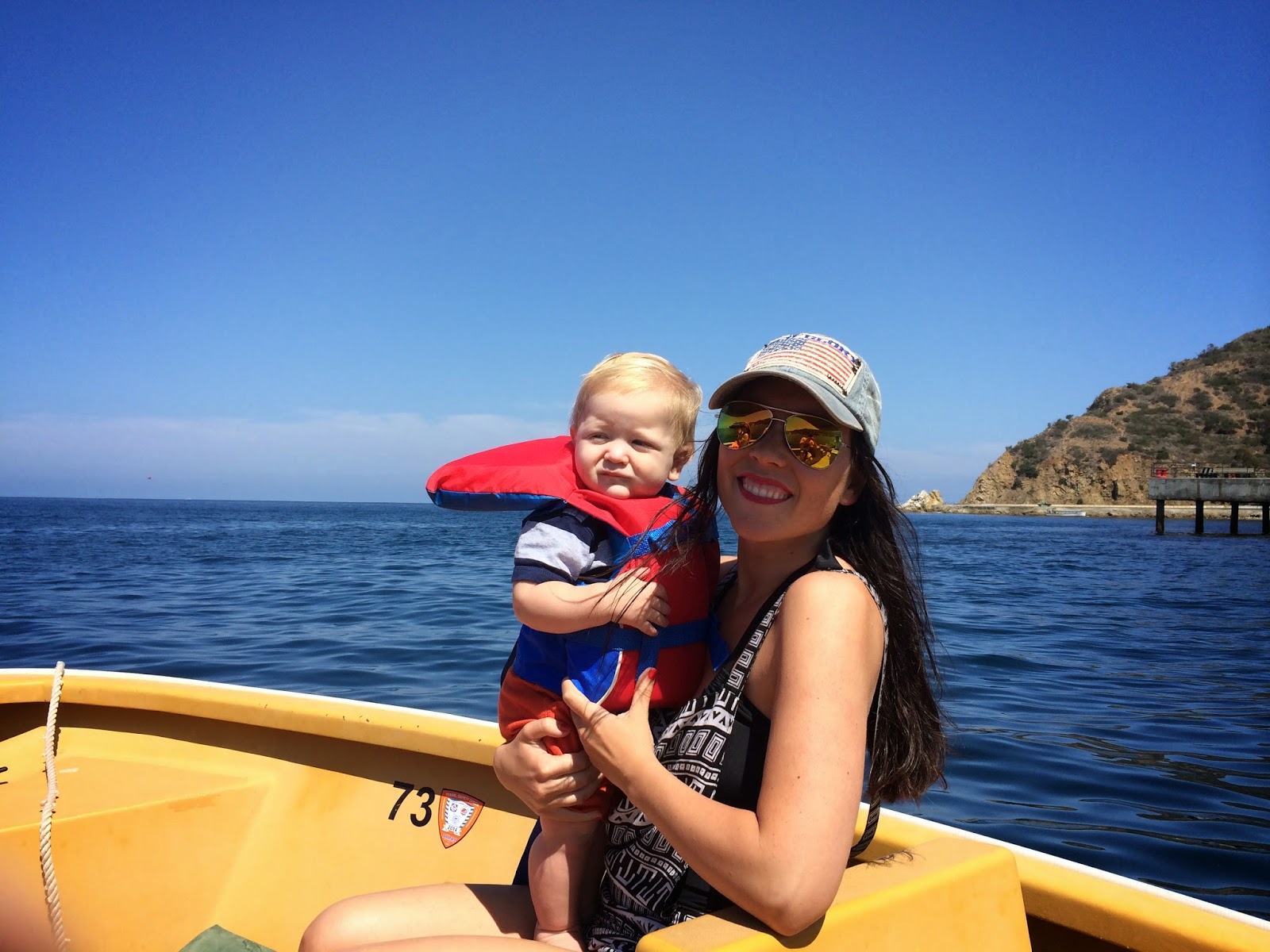 While walking around I found a Dole Whip station!
They have them at Disneyland, but each time I go the line is SO long that I just cannot wait in it with Kameron.
So when I saw the sign in the window I about died!
I think I've hooked Glenna now. :) 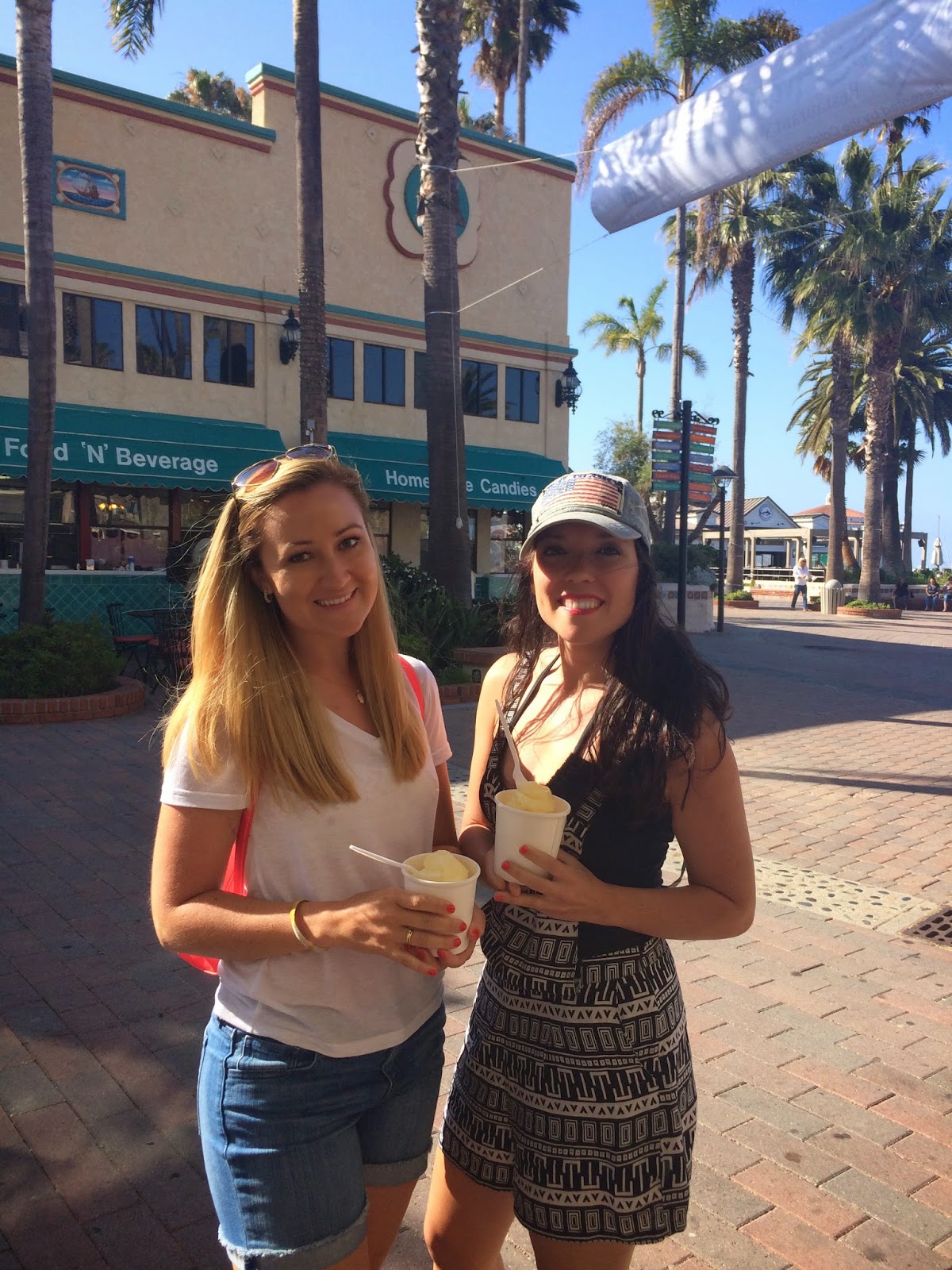 That evening Glenna, Kam, and I hung out in the hot tub while Matt & Alex attempted to catch dinner off the pier.
Thankfully we had bought ribs and salmon as a backup...if you catch my drift. :)
At night Matt & Alex would go on "night cruises" in the golf cart.
On this particular night they saw lots of critters and even caught a picture of this Catalina fox! 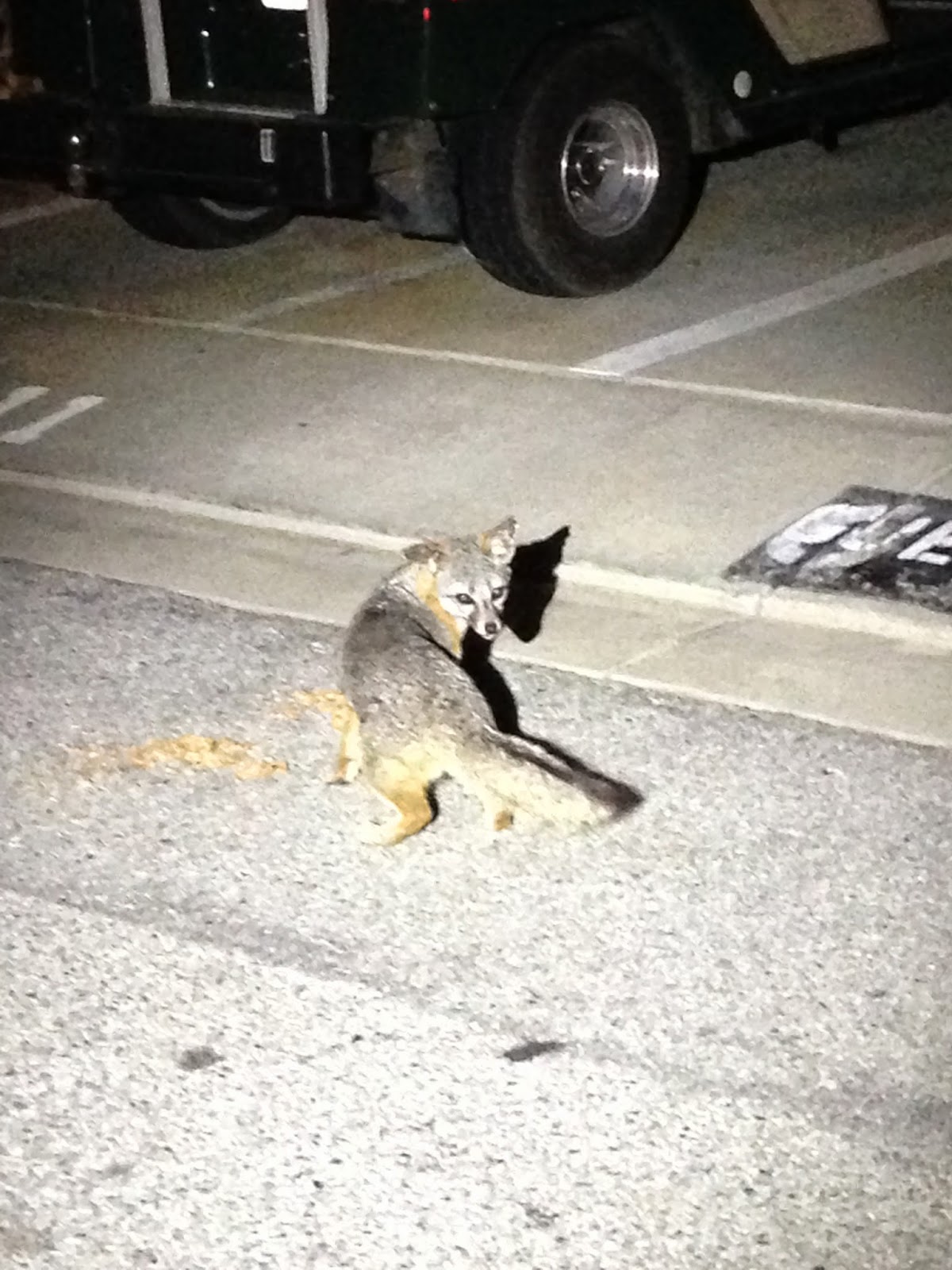 Thursday came all to quickly!
I think Kameron was starting to get the vacation vibe and actually slept in...like 30 minutes!
Our little family went on a tour, while Matt & Glenna did...well...I don't really know what they did.  Haha
The tour took us all around Avalon and then up the back roads (which were V.E.R.Y. bumpy) to the Catalina airport.
We saw 28 buffalo along the way!
Buffalo are not native.  Haha
BUT...they were brought over for a movie in the 30s and then have just been there ever since. 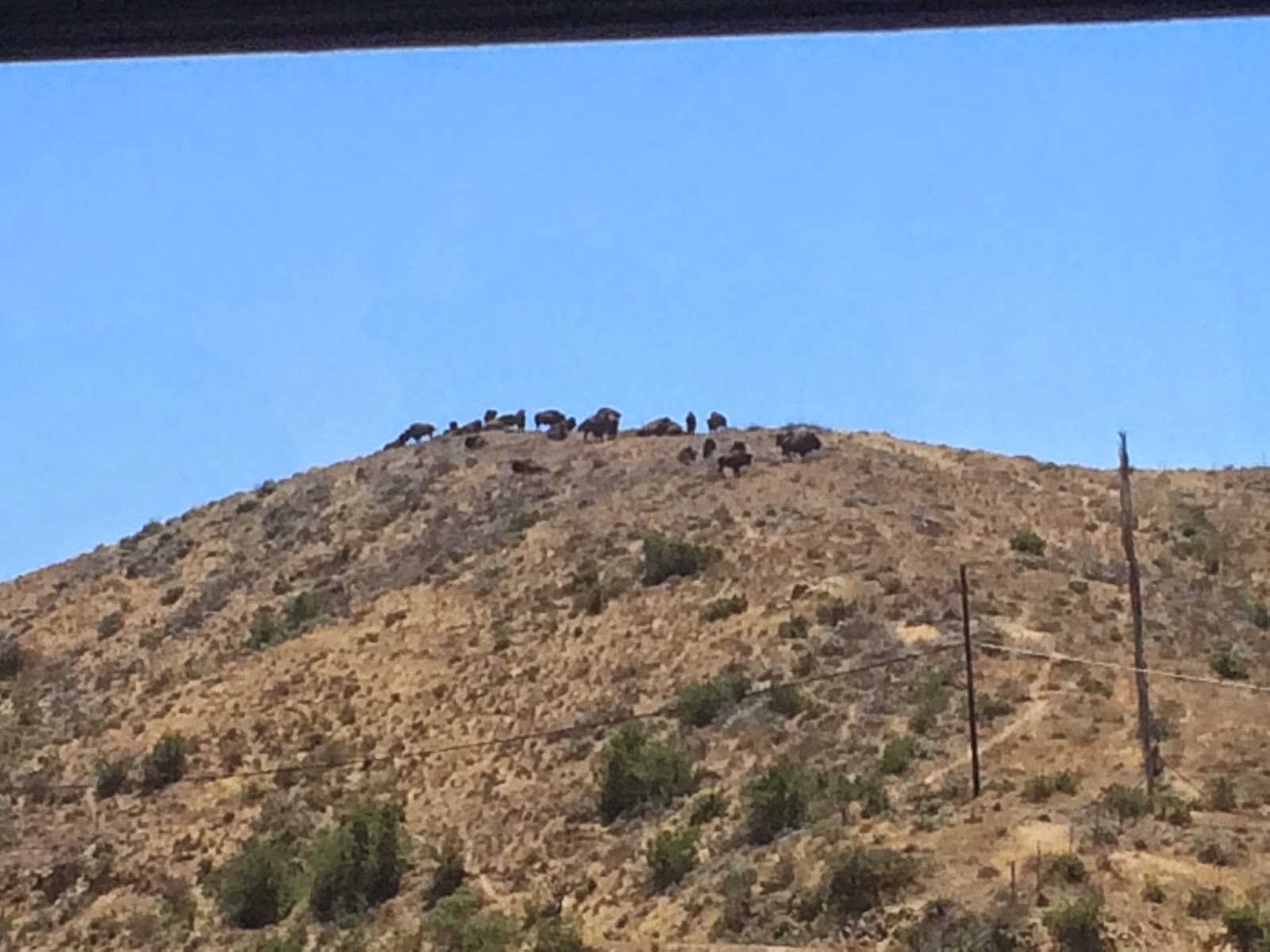 Here we are at the airport.
Which is where we got Alex some buffalo jerky and Kameron a stuffed buffalo. 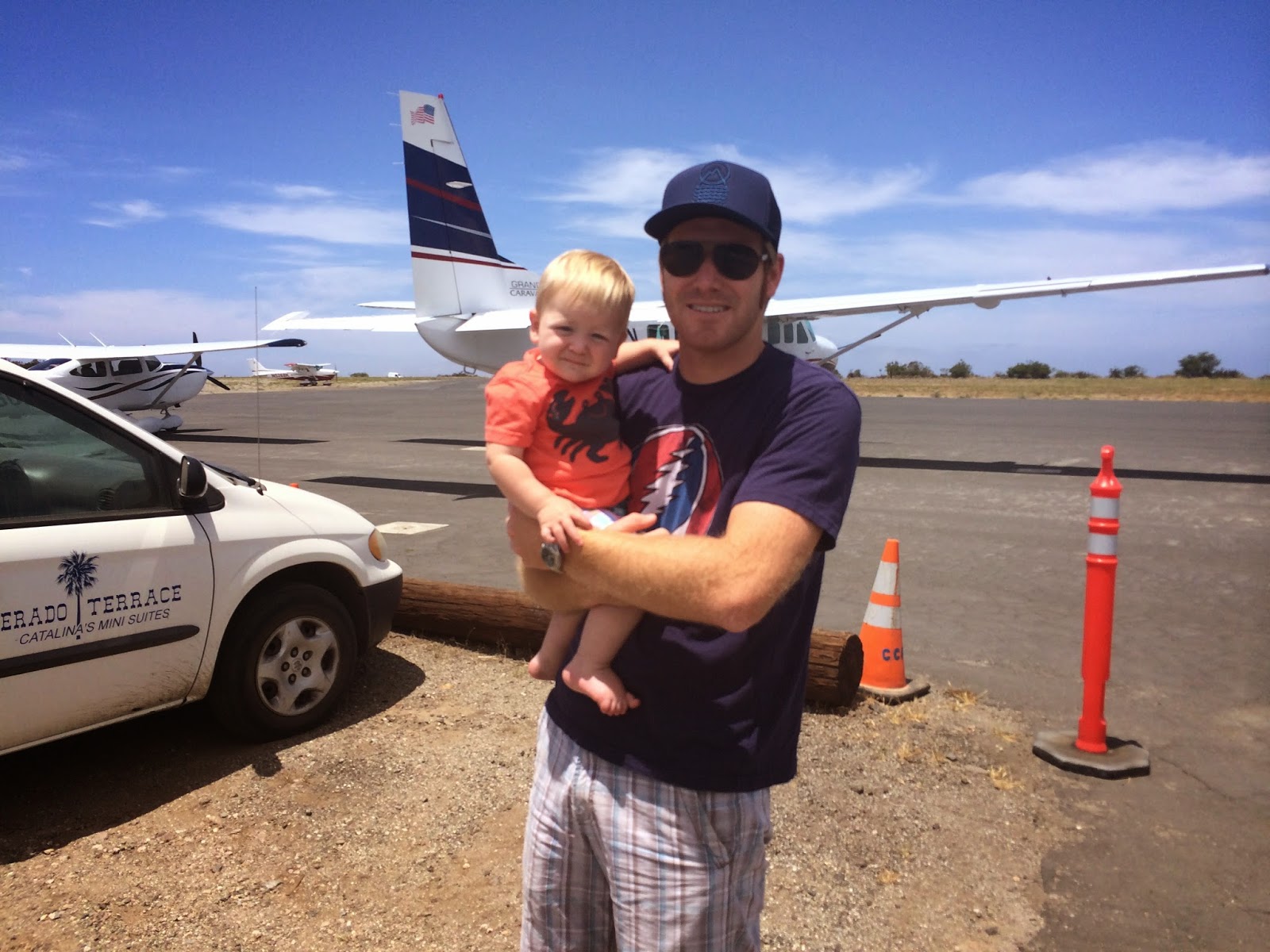 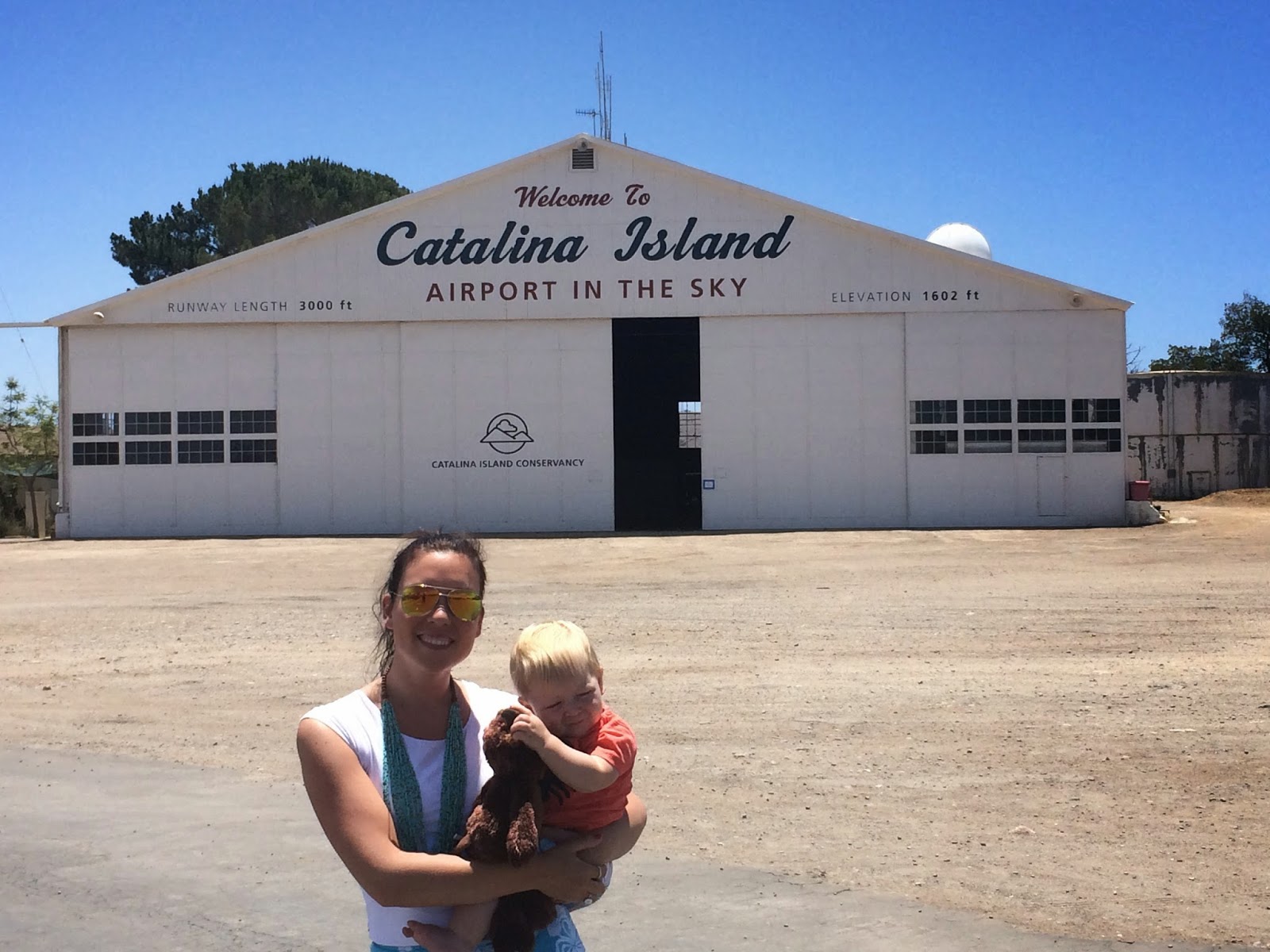 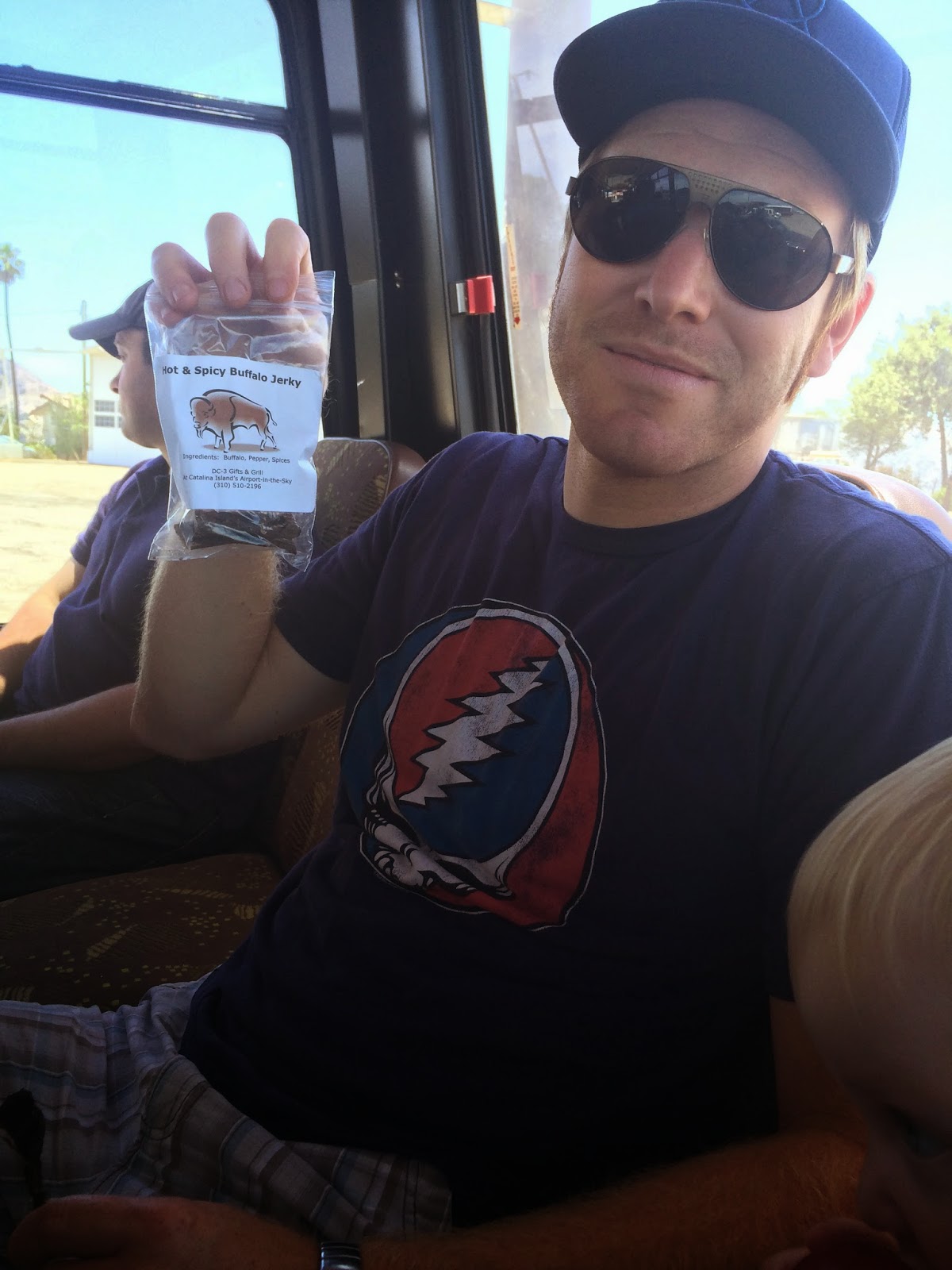 On the way back down to Avalon we had a fox sighting!!
I was SO happy to see one too!
It was adorable! 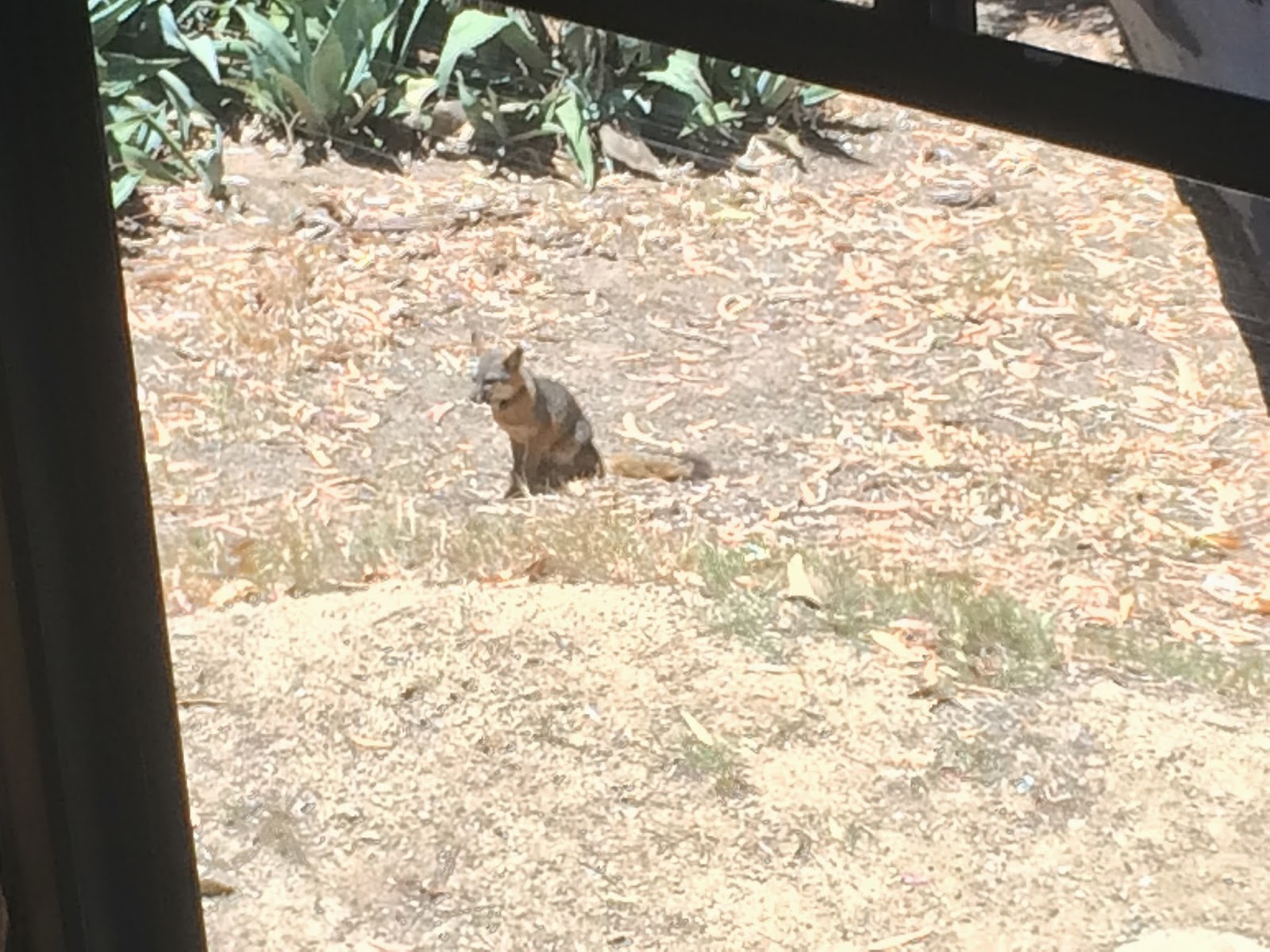 SO cool that the church is here too...on the tiny island. :) 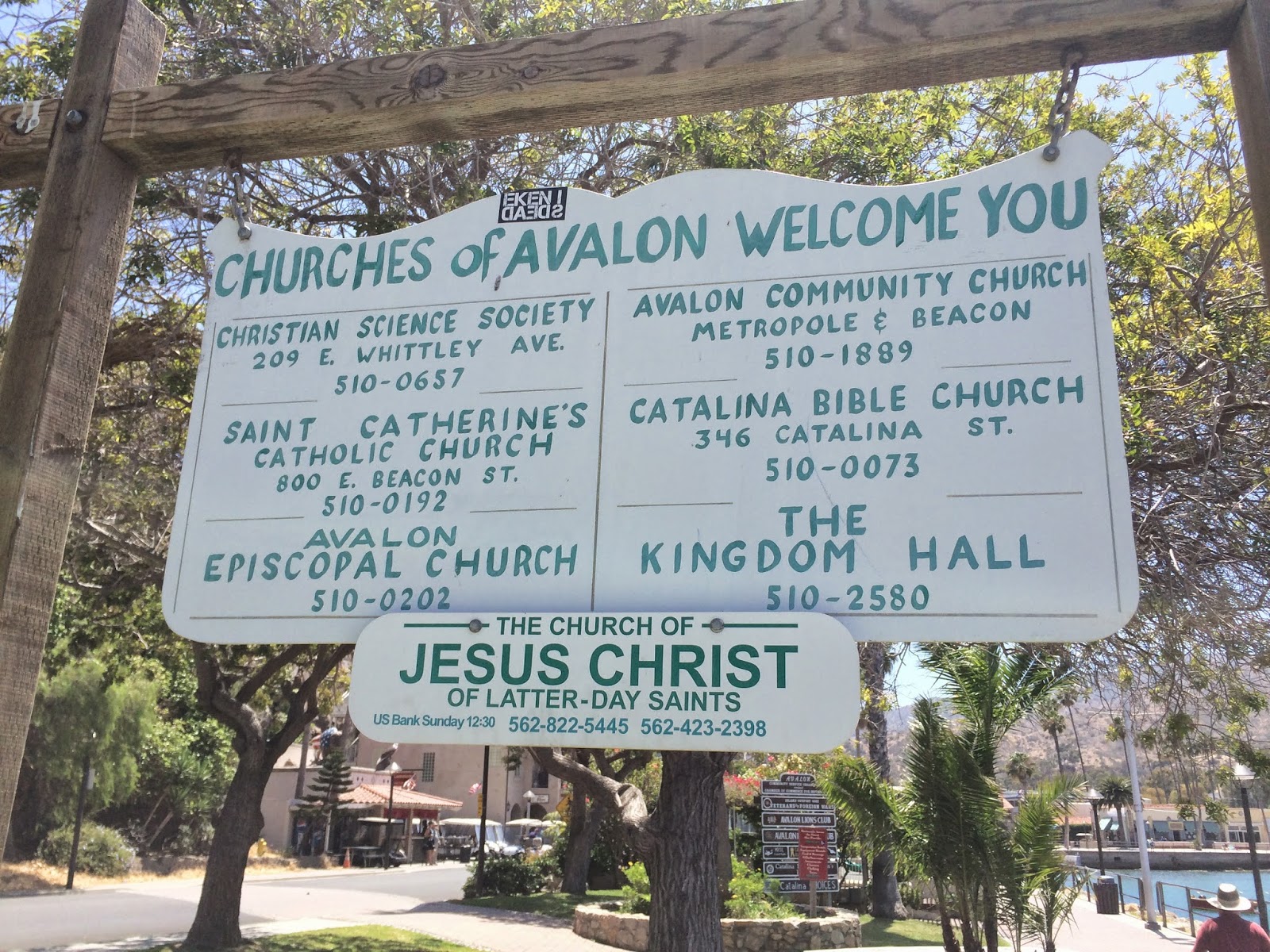 We spent the afternoon on a rented boat with Matt & Glenna again.
I have no pictures from that particular trip...but it was great!
We saw wild sea lions playing in the water!
They were pretty close too!
I was so excited!!!

Then that evening we had our one meal out.
We all ate yummy yummy fish and enjoyed the harbor at sunset.
(The fish was so yummy, it was even baby approved. :) 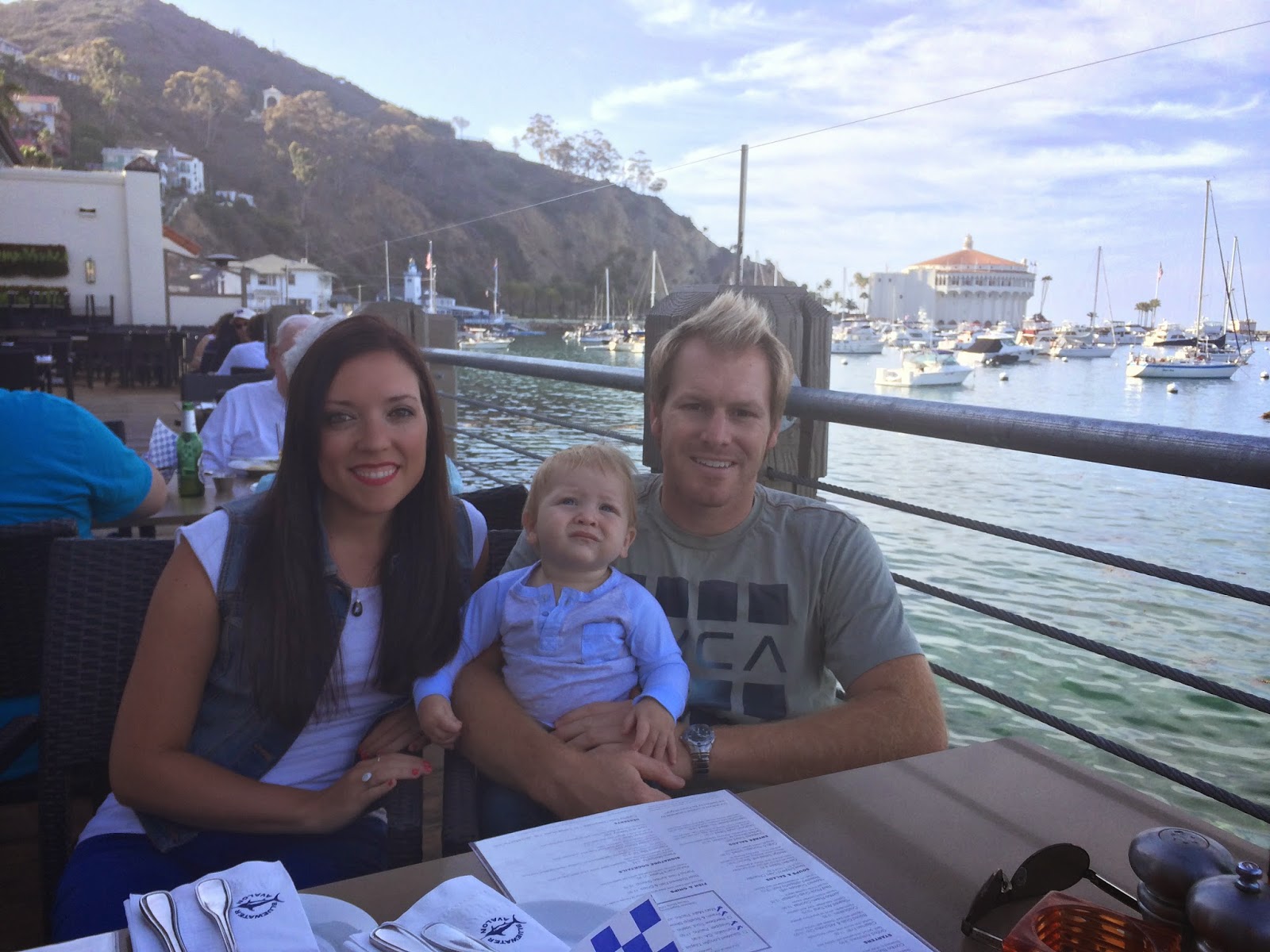 And like all vacations do...they come to an end. :(
We spent the morning packing up.
We had a few hours to kill between checking out and when the ferry left, so we just hung around the harbor and enjoyed our last little bit in Avalon.
See?  Even Kameron's unhappy about leaving. 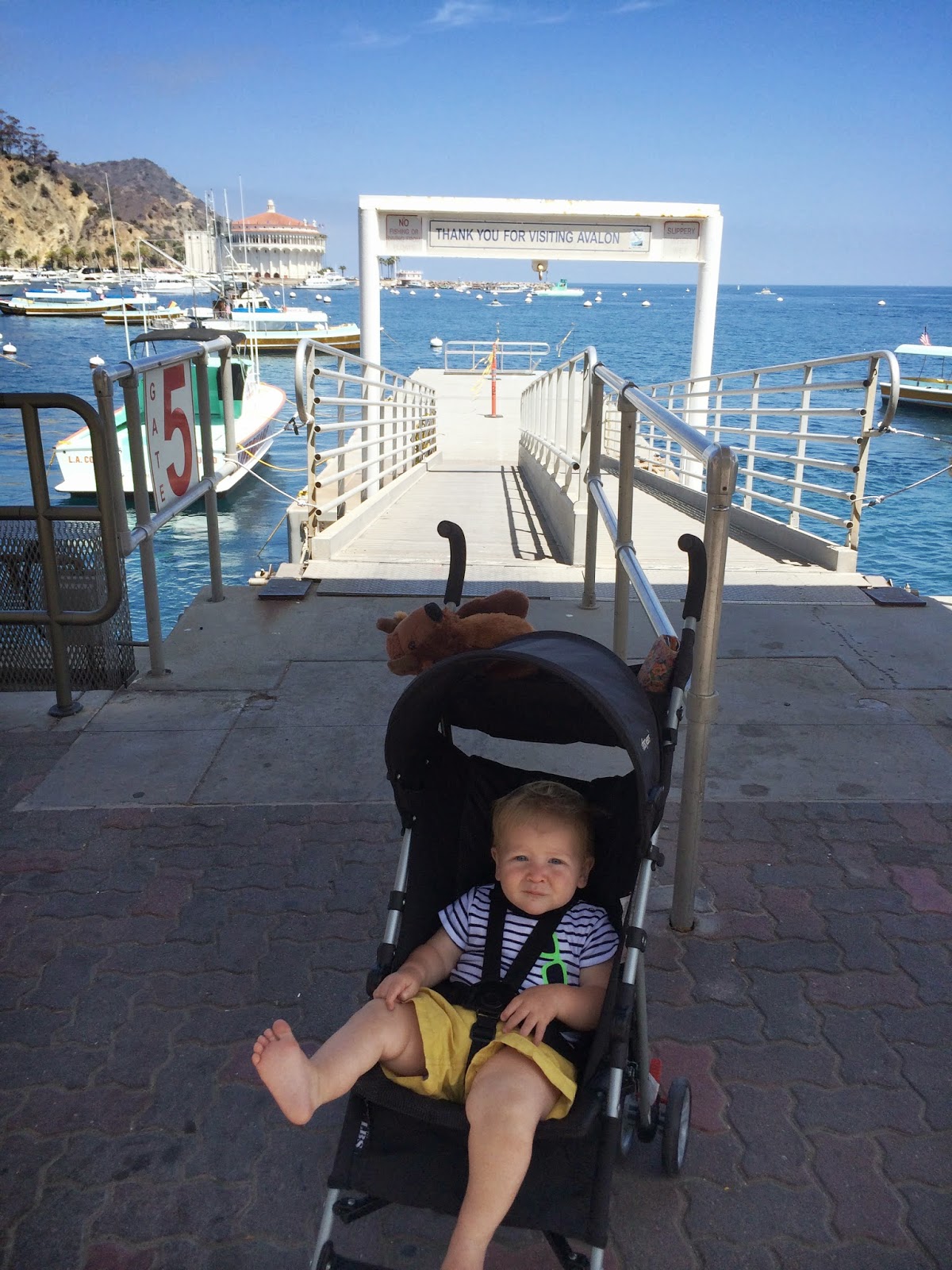 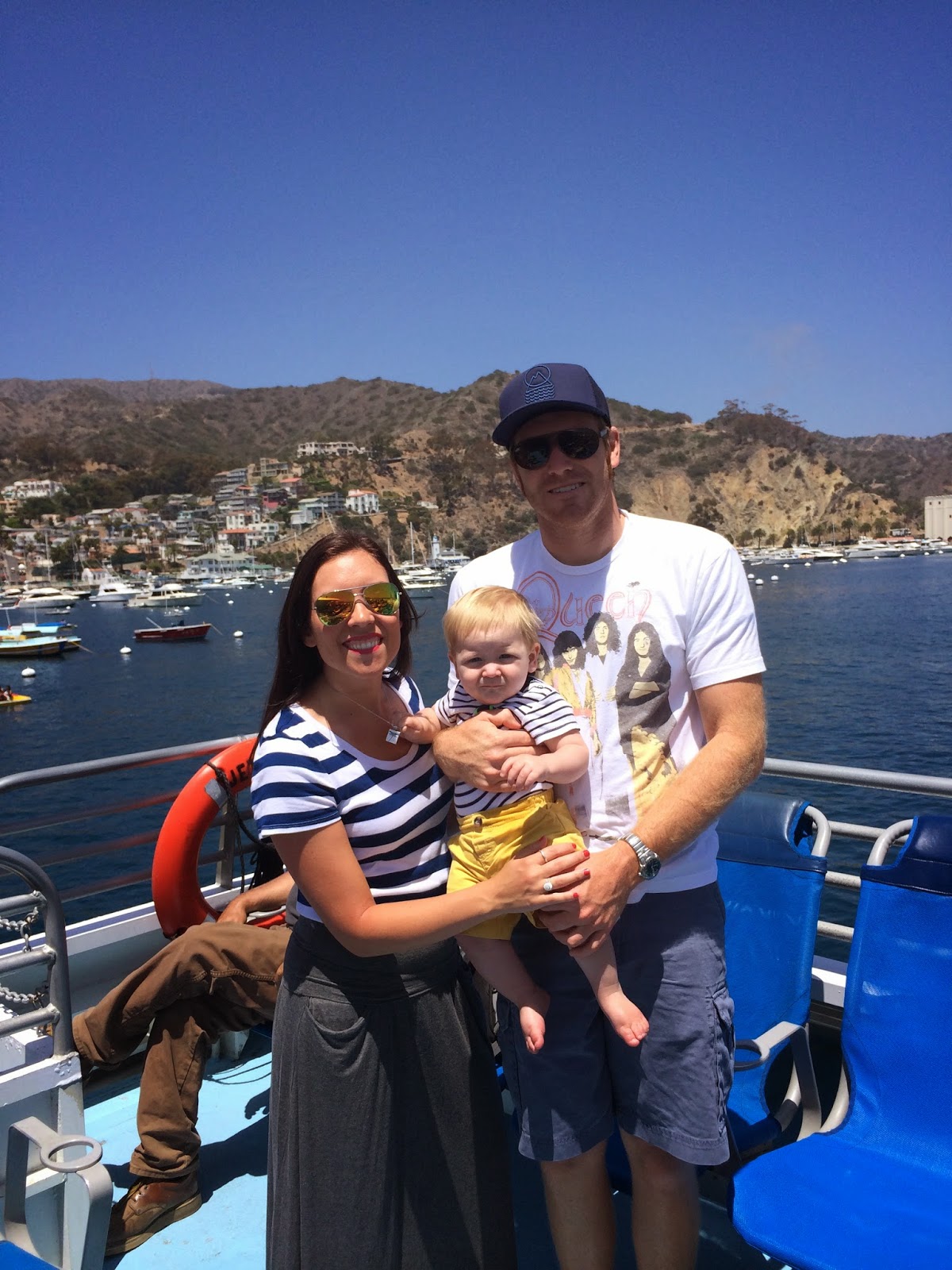 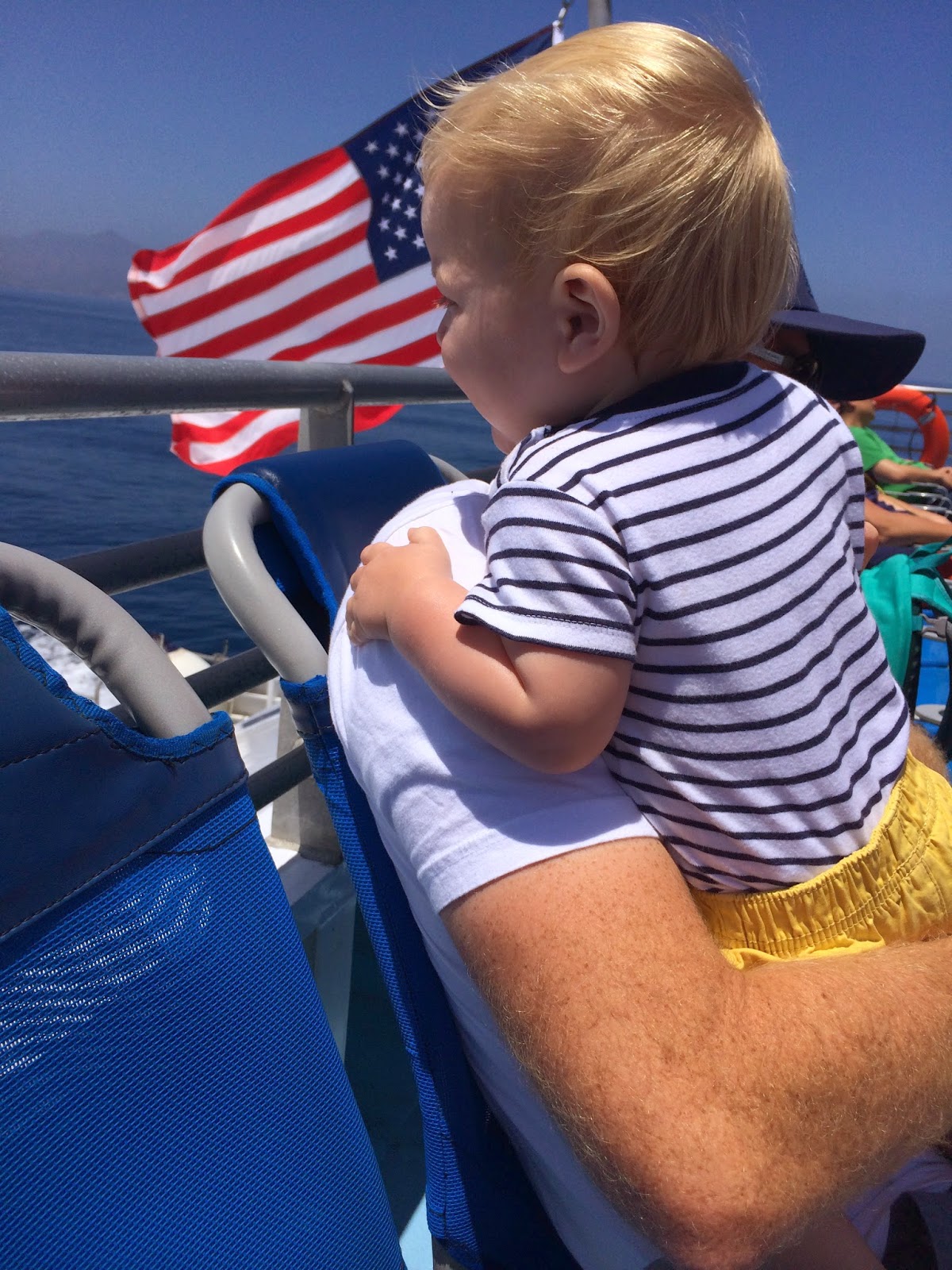 I am SO glad we took this vacation!
We definitely needed it.
It was fun to spend time as a family and with our friends.
Matt & Glenna were great!
They never once thought Kameron was cramping their style...or at least didn't let it show. ;)
I hope to go back again!