I'm a little behind on making goals for this year.
That's mostly due to the fact that the majority of days that have happened in 2013, I can barely muster up the energy to shower.

As I was trying to think of goals for this year I really could only think of one:

Do the best I can.

That's it.
This year I can't set goals like "run 10 miles every week" or "practice the piano every day" or "read 5 classic novels."
My body is growing a baby.
A BABY.
A little human is growing inside of me.
When other people were pregnant it didn't really hit me so hard.
But man...that is crazy!!
My body is growing and nourishing another body.
As cool as that is....it's also exhausting and making me ill.
I am not one of those blessed women that never gets sick during pregnancy.
Ohhhh, how I wish I were.
There have been times when I think I'm starting to get out of this funk and then I throw up 5 times in one day.  That's a dream.
However, the last few days I really have started to feel a little bit better.
Not back to my normal self...but at least not feeling like I just want to keep banging myself in the head with a sauce pan because that would feel better than what is going on in my belly.
I'm 14 weeks tomorrow (Jan 31st) which means I am a third done!
I'm so praying my 2nd trimester brings good things.
I really do want to enjoy being pregnant.

Well, that was a long tangent on getting to my point of just doing the best that I can.
There are some days when really, truly all I can do is plop myself on the couch.
There are some days when I can go run 1 or 2 errands and fold the laundry.
There are some days when it's a mixture of those two depending on the hour.
I just need to do the best that I can for my body.
It is carrying something so precious.
So if that means one day I can go for a walk and the next day I pretend I'm going for a walk...that's ok.
It's been hard to let my body do what it needs to do.
I've always been someone on the go.
Always working, always dancing, always running around, etc.
I've had a little bit of an identity crisis.
I suppose it's a good thing I've had so much time to think and ponder so that I could figure out in my mind how I need to take care of my body.

2013 is going to bring a TON of changes to our little family.
So with all of it coming at me, I just need to do the best that I can.

So here we go...
Alex's and my life as we know it will never be the same.
And as much of a shock factor it was in the beginning, we are starting to settle in to the idea and are excited for this new phase in our lives together.
So I'll just start from where it all began...

When I was 19 my doctor at home diagnosed me with PCOS (Poly-Cystic Ovarian Syndrome.)
I had one period at the beginning of my Freshman year at BYU, but then never again that school year.  When my mother found out, she was obviously concerned and took me in to see what was going on.
They did some ultra sound work and went ahead and told me I had PCOS.  She told me that having children was possible, but would not happen easy.  She told me it would take a long time to get pregnant and just keep trying.  So I have lived with that belief for 6 and a half years.

I get married at 24.  Now the option of having children is obviously real.
Not too long in to the marriage I tell Alex I want to go off birth control.
He says no.
I explain to him that this could be a many year long process to conceive and that I don't want to waste too much time before we start trying.
He still says no.
I cry.
He still says no.
I ask a couple months later.
He says no again.
I cry some more because I'm terrified.
He tells me he knows everything will be fine and that I don't need to worry so much.
I wait a little bit longer and ask again.
(I could have been a crazy person and just stopped taking the pill without telling Alex, but I would have never wanted to start trying until we were BOTH ready.)
Finally, we come to an agreement that my pill package I take for October 2012 will be my last one.
YES!
So right before Halloween I have my period. (Sorry for you men reading this...)

We just decided that we would stay calm and not get discouraged when I did not get pregnant.
Well, little did I know that I would not have another period.
Thanksgiving came and went.  Still felt normal.
Except for one thing...I was a week late.
I just thought it was the birth control getting out of my system and throwing off my cycle.
I did not want to freak out so I just kept thinking it was going to come at some point.
Finally once I was 2 weeks late I decided to take a pregnancy test at work.
I read the instructions on the how to take it like 40 times!
Like it's rocket science or something to pee on a stick...but I was SOOO nervous.
So I did it.
Then I set it aside and waited.
Then all of the sudden I saw it come up positive.
But I thought my eyes were playing tricks on me.
So I looked from the paper back to the stick over and over just to make sure I was seeing it right!
Once I realized it was actually positive my heart started racing, I started sweating, and I just kept saying repeatedly, "Oh...Ohh...Ooohhhh..."
I couldn't figure out if I wanted to laugh or cry so I think I did a little bit of both.
Though I'm not entirely sure...I felt like I was in a bubble.
Once my head stopped spinning I had to then figure out how I was going to tell Alex.
The week I found out was a CRAZY week!
Between two jobs I had to work 65 hours, teach 2 dance classes, pack up our apartment, and move!  I was already running on low.
So the thought of trying to figure out some cute way to tell Alex made me anxious so I decided to get rid of that anxiety and just tell him.
Unfortunately I was not able to see him for another 8 hours!
But when he got home I showed him the test and our conversation went like this:
A: See!  I told you! (meaning: I told you it wasn't going to take long.)
K:  How did you know?!
A: I don't know.  How did I know I was going to marry you the moment I saw you?  I just know things.

And there you have it.
I am pregnant.
I was totally thinking I was so lucky to not be sick!
Until....
Week 6 rolled around.
Since then I've been ill.
I'll have one good day and think I'm in the clear, but then the next day hits me like a beast.
I'll be 14 weeks in 5 days so I am just praying so hard that I'll be one of those blessed women and not be sick anymore come my 2nd trimester!
(Your prayers are appreciated as well.)
I had my first ultra sound when I was 11 weeks.
Our baby looks good and everything looks normal so far!
So remember that PCOS thing?
Well, my doctor says he's pretty dang certain I do NOT have PCOS!
He says it's not uncommon for girls to have problems with their periods when they go away to college and really wishes my old doctor had explored other options for what could have been going on.
He says that I do not have any other signs for PCOS besides my period going out of whack.
Especially since it took me like a week to get pregnant.
HOORAY!  It felt amazing for him to release me from that diagnosis.

We are looking to have a baby come August 1st!
We won't know the gender until March and we can barely stand it!
I think I've covered all the questions people have had.
If there's any more let me know! 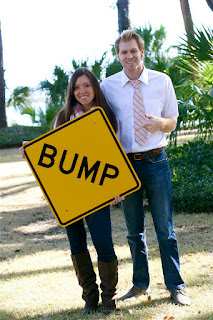 Hello, World.
It's been quite some time since I contributed to my little blog.
I know...tsk tsk.  I should be better about updating my life.
For some reason I haven't had that burning desire to write on here.
I'm not sure why because it's not like nothing interesting has happened.
My life is by no means boring.
I guess I just went through a 3 month blog hiatus.
Hopefully I'll get that fire back.

So for a quick update:
Thanksgiving was great!
Christmas was great!
We got to go to the Florida Keys for the first time and I definitely wish I was still there right now as it is in the negatives at night in this Narnia land of Utah.
(p.s. roosters/chickens just roam the streets in Key West.  Literally.  No joke.)

How's that for a quick update?

Well, lastly...the thing that is the most fresh in my mind is something we talked about at Institute last night.  Alex and I have it every Tuesday night this semester and it's something that we really enjoy doing together.
Our teacher made all 50 or so of us stand up individually to say our name, where we're from, what we're doing, and a "blessing story."
(First of all...it was HILARIOUS watching all the single people whispering things to their friends like, "He's cute!" or "She seems cool.")
Second, it was so amazing listening to all of these people publicly thanking Heavenly Father for their jobs, their families, miracles that have happened in their lives, their missions, their friends, the temple, etc.
Alex and I were last.
Alex said his blessing right now is that he is going to be Jack's escort for his first time going through the temple. (Which is on Friday!  Yay.)
I have so many blessings in my life...of course!
But, the biggest blessing I have in my life is having broken up my first engagement.
Did it hurt at the time?
Oooohhhh yessss!
Did I think I was going to get through it.
Nope, not really.
Did I lose faith?
Sad to admit...yes.
However, that experience taught me that I am stronger than I think I am.
It taught me that I can do hard things.
It taught me that even when I don't think I have anything left within me...I actually do.
And just when I started to accept those things...Alex came in and really saved the day. :)
I love him so much.
I thank Heavenly Father for him pretty much constantly.
I really don't know what I would do without him.
He makes me feel so very special every, single day.
He was worth the wait and the heartache.  SO worth it.
So yeah...as sappy as it was...
I told the class the extremely brief story of my broken engagement and how that led the way for the biggest blessing in my life, which is my sweet husband.

Now...let's hope I keep up on this updating the blog business.